Stoves of all shapes and sizes

Lately, things on here have become rather stale since I'm assuming nobody wants to see pictures of me doing hill repeats or riding a trainer. So I scratched my brain and tried to come up with some fresh content to contribute to a topic that has been receiving plenty of interest lately in the bike/backpacking crowd.  Stoves. 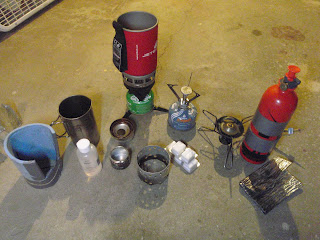 I've used lots of different lightweight stoves in the past and currently have a decent arcenal to choose from. Six different models and methods in fact. Right now I have a MSR Whisperlite, a MSR Pocket Rocket, a Jet Boil, a Penny Stove, a Pot Pressurized, and Esbit. I've cooked my fair share of food over these stoves and have learned a thing or two in the process, so here are my 2 cents and what I've found to work well. 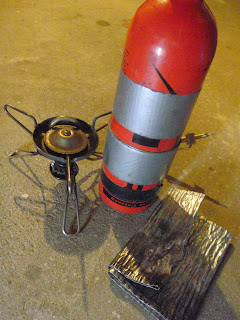 The first lightweight stove I used was some sort of Coleman backpacking stove that only lasted a few months.  I (I is actually my family since this is when I was 15ish?) then picked up a MSR whisperlite and have since have had 3 of them I believe. Mind you, they have seen some serious abuse and none of them actually broke. One was lost (some place along the Appalachian Trail I think), one my brother took, and I have the third.  What can I say about them? They are a workhorse and are great to cook with, my brother and I used one for 2 months while touring and on countless nights out, they just work. 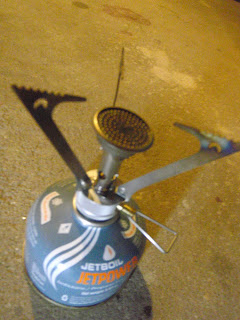 Next up is a MSR Pocket Rocket. Truth be told, I found this stove in the parking lot at 18 Road in Fruita and haven't used it much. However it falls some place in between the whisperlite and a Jet Boil as far as performance goes. Sure it's light, but it uses canister fuel, which is something I've just never been a fan of. 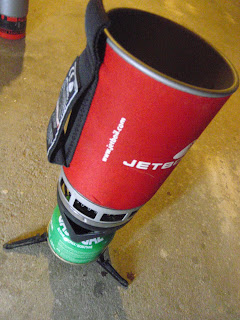 I picked up this Jetboil a few years ago and have used it quite a bit. It works great when sleeping in your car. I've made soup in a construction site in Aspen at the X-games, oatmeal in a parking lot before the 12 hours of Snowmass, hot coca at the end of dirt roads and everything in between. It's great at heating things fast but the small flame area and its blowtorch characteristics also limit what can actually be cooked on it. Again, it uses canister fuel which I'm not a huge fan of, however it is a great item to have when it's 5am and you're sleeping in the back of a small car.
Next up are three stoves that all use the same pot. I've been using a Snowpeak Ti mug (just the mug from their coffee press) on all three stoves and sure it has some drawbacks but it works. First off it's is rather narrow for it's height, which means that the bottom area (heating surface) is small compared to the volume in the mug. This means that for a stove that just heats the bottom, the heat transfer isn't all that great (more on those stoves later). Who knew those thermodynamics classes would actually pay off. Lastly, for you super geeks out there, a Ti mug is certainly lighter than a Aluminum mug of the same volume, however comparatively, titanium is a much worse conductor of heat than aluminum. So more fuel is needed to heat the same volume of water in a Ti mug compared to a Aluminum one. So, the bottom line is that at a certain point the extra fuel needed to heat a Ti vessel is greater than weight savings gained by using Ti rather than aluminum. How's that for geekery? 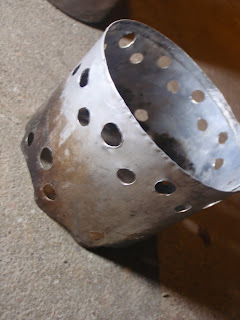 Alright, back on topic.  First up is the classic esbit tabs. I've used them quite a bit and they have their place. Light, small, easy to carry etc. The setup I use for esbit is a custom Stove/windscreen/pot stand I made from a piece of air duct. I made it in such a way that it slips over the bottom portion of my mug which means it takes up literally zero space in a pack. 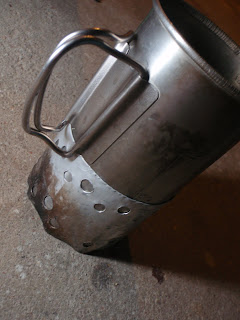 When in use, a exbit tab is burned on the ground, the stove is set on top and my mug sits on/in the top of the stove.  It's simple, light, cheap, and it works great. However, as I mentioned above, the small surface area that is heated means that it isn't overly efficient. 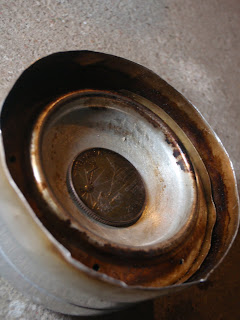 Next up is the classic penny stove (actually I use a quarter). Mine is simply a copy of this stove. I either use the same pot stand/windscreen from the esbit system or just use a bent spoke to support the pot. It works, however with the small mug it also has drawbacks. I think it would work great on a larger pot however due to the design of jets the mug I have is just too narrow to receive much heat. 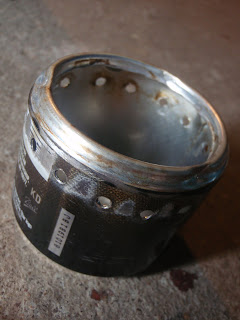 Last up is what I've been experimenting with lately, a pot pressurized stove. It's based off of this design. However, since I don't have access to a press, I simply used two Doubleshot/Go-Fast cans and started experimenting.  So far, it has surpassed both the exbit and penny stove in performance and fuel consumption. The stove doubles as a pot stand and due to it's narrow design, the flames engulf the bottom and part of the sides of my mug which translates into excellent heat transfer. I can boil 2 cups of water with roughly 3/4 oz of fuel in approx. 5 min. This stove coupled with a small windscreen makes a great lightweight kit, which all easily fits into my mug along with several days worth of fuel and still leaves room for plenty of coffee. 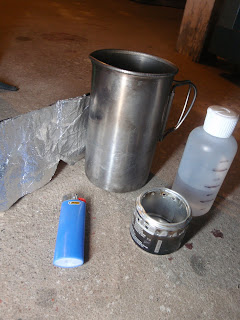 It's been an evolution and I'm certain that I'll continue to change things, however I'm very happy with the kit as it sits now.  I'm not sure of it's weight since the only scale I have is a bathroom scale, however it's simple, pretty rugged, and very cheap.
Well, that's my $0.02 of what I've learned through lots of botched meals and burned fingers. I'm certainly no expert, but I've found what works for me and what I'm looking for in a stove.  Everything to back country pineapple upside down cake to freeze dried meals can be cooked with one of these setups. Happy cooking!

back when i still backpacked in the ultralight fashion, i used a pepsi can stove. it's similar to your last pic. superlight, reliable, no working parts to lose or foul. very cheap to make (almost free really). boils water super quick with very little fuel. highly recommend it.

i bought a small grease pot from a dept. store. inside that nested my stove, windscreen, pot holder and stand, and lighter. money. since it is so light, some dudes that hike the PCT or AT carry one or two of the stoves as backups in case something happens to one.

I've seen the pepsi can stoves. The theory is that you can make one in a few minutes with a jackknife if you're good. However, I'm not that good.