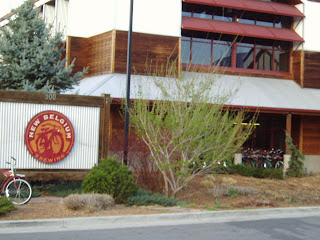 Tonight was the first installment of the local New Belgium Short Track series, so I cruised across town to get in on the action. I signed up for the Mens B race since I really didn't know what was going on. I've only raced one short track race before in Boone a few years back, and quite frankly, had no idea how to race one. I caught the end of the Men's C / Womens race as well as the Juniors race before my race took off at 6. I got pinched at the start and was in about 6th place for the first half lap until I moved up to 3rd. At the end of the 2nd lap my front wheel washed out on the last downhill and I went over the bars. Luckily, my face and chest took most of the fall!! I lost a spot, but quickly gained it back. For the rest of the race I was in a 3 way race at the front. We had a big gap on the rest of the field and actually lapped quite a few riders. By the last lap the 1st place guy (Skyler if I remember correctly) had a 20 second lead on myself and another rider. I took off and put a gap on the 3rd place rider but couldn't quite catch up to the leader. I finished in 2nd a few seconds back from first. I finished with more than I thought so I should of attacked sooner, but I really had no idea of how to only race for 25 min. All told, it was a sweet time and I'll be heading back next week with a little better idea of how to ride a ST race. Just over 27 min of race time with an ave HR of 188...not too shabby. 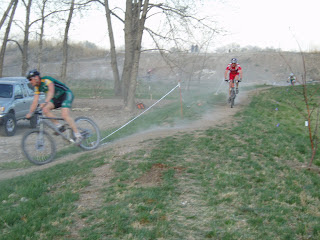 Mens A race. Thinking I should move up to this class?? 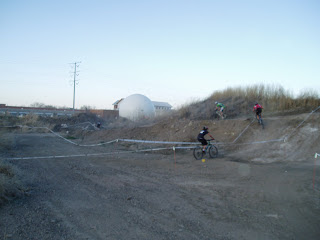 More of the course. Next week I'll also be running different tires. I expected the course to be more hard pack, however it was fairly loose and I was drifting all the corners. 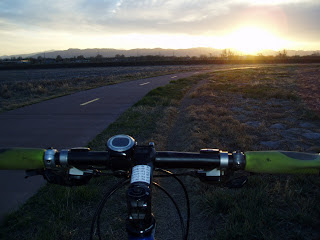 Not a bad cruise home!!