In search of flow

Yesterday I decided to make the most of the warm weather (low 70's I believe) and do some exploring on the local trails. First I hit up the foothills trails for awhile, then headed up around the north end of the reservoir to Lory State Park and rode the trails there on my way south to the adjacent Horsetooth Mountain Park. 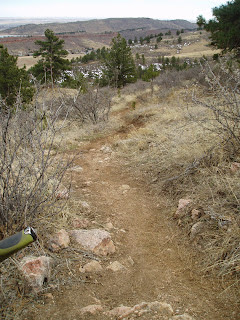 I wanted to ride up to the radio towers in Horsetooth, however as I got higher there was still some snow on the ground and the trails were getting muddy. Not wanting to leave ruts, I stayed low and made my way South to connect with the Blue Sky Trail System. 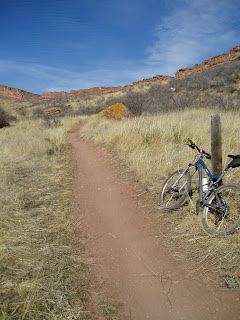 The first part of the trail is super fast, then it gets rough.... real rough. The last third or so of the trail on the way down in to Loveland smooths out and bit and allows you to crank up the afterburners again.

Then I rode into Loveland, found the first gas station, filled up on Gatorade and rocket fuel and headed back. 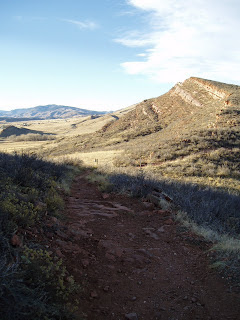 The sun was getting rather low on the ride back and I was starting to get worried about riding the last bit in the dark. 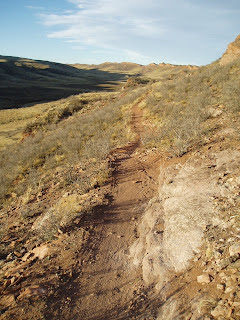 Getting near the North end of the Blue Sky trail...the shadows are getting longer...

I made it back to the end of the Blue Sky trail and decided that even though the sun was setting I would continue on back through Horsetooth and Lory, instead of riding the roads from there back....who lets a little thing like darkness stop a good ride anyway? This time I took a more direct line through Horsetooth and Lory and made it to the gate at lory just as it was getting really dark. I kept to the roads got to my front door at 7:15 (the sun sets at about 5:30...you do the math). All told I was outside for about 8.5 hours with about 7.75 hours of ride time, and a hair over 70 miles. Of that I think about 60 of it was on singletrack....not too bad!

that's a pretty good ride! did u ride coyote ridge then?

No, I wanted to hit it on the way back, but didn't have time. I'll be checking it out this week sometime hopefully.

You need to get out to Bobcat at ride Ginny Trail...

It's out by Masonville

Either this weekend or next I'm hoping to get in a 100+ mile ride as prep for the rim ride 100. So thanks for trail info. It'll make a nice addition to riding in that area. I'm still trying to scout all the trails!! I just hope everything stays nice and dry.

I am planning on the Rim Ride as well. If an option....carpooling would be a smart idea. I't get in contact with you when the time draws near.

Way cool, and I'm way jealous that you guys are doing all of this riding while we are all wrestling with this gravel slop back in IA.