Well, I made it back to Ames on Friday evening and considered it a good trip all told. I now think I'll be moving my bicycle fleet out to Fort Collins right away in January. I originally wanted to go in December, however pushing it back a bit gives me many more apartment possibilities after the first of the year. What's another few days?? After all, yesterday I just crossed the 4 month mark of not having a "home" and being that guy on the couch!!...I wonder what a bed feels like?

In bike news, Dave gave me a call the other day to let me know that a little package had arrived in the mail for him. Back in the spring of '05, myself, Dave, Eric, and Jubil headed down to Missouri to ride in the Midwest Mountain Bike Festival. Being that it was in Missouri we all dressed as a hillbilly team and rode all the events in our various outfits. For instance I won the uphill time trial wearing no shirt and rolled up overalls. Long story short, Dave won the raffle for a custom built frame from Maplewood Bicycles. He has been chasing it down for the last year and a half but after talking back and forth with them every few months he got the frame in the mail. He had a custom TI cross country frame built. It is so light that I almost hit myself in the face the first time I picked it up. Lindskey bicycles was founded by the same two guys who founded Lightspeed so it should prove to be a sweet ride. Now comes the fun part....building it up!! Here's a few pics. 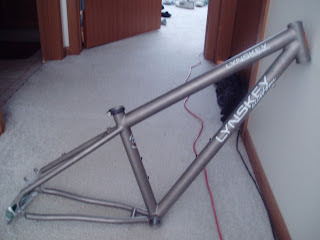 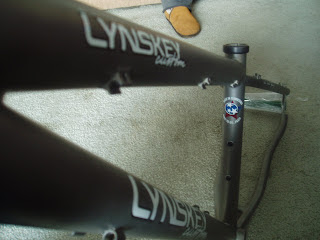 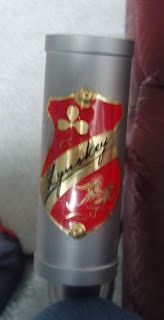 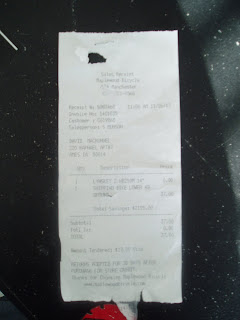 Holy crap. Yeah, the original litespeed guys were the Lynskey family. That frame is worth at least 2195. Unbelievable that that is a prize. Their road frames are more well known though. They started the custom chainstay strength/stiffness customization. They make awesome frames. That is a very very lucky win.