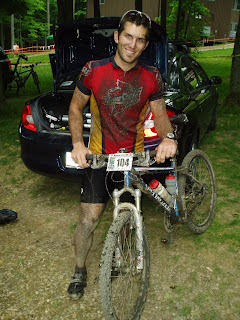 I showed up to the race venue at about 8 PM on Friday and got checked in and all that good stuff. Tam was at the race with me so we got set up then headed into town for some dinner. Then we headed off to sleep early so we could wake up for the 7 AM start.

The first 6 miles of the race were a roll out start. However not too many people followed that and I was left mid pack fighting for space. When we hit the singletrack it thinned out a bit and I was able to pick up a few spots. I rode well on the first 20 or so miles of singletrack despite a broken spoke and a flat tire. The trail was super rocky, tight at twisty. Riding a hardtail was a good choice on the open sections, but on the rocky parts I decided that it should have a new nickname...."the sterilizer".

At the halfway point I was feeling a bit beat, good thing that most of the singletrack was during the first part of the race. However the gravel and fire road sections were no peace of cake, with several long sustained climbs that left you hurting. Oh yeah....it rained for a while as well. I was riding with a group of 4 at the time and we had a pretty good pace line going on a rails to trails section and whenever you were in the back....well, you got pretty well pummeled with mud...hence my mud suit in the picture.

I finished in 10:00:50. It was my first 100 miler and was a good time. The course was pretty crazy, but I had a good time riding and suffering a bit. I'll hafta look to do more in the future.

Big thanks to Tam for going to the race with me so I could see a friendly face at the aid stations!! 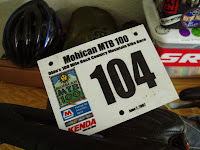 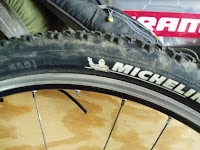 Hmmm....What's missing from this picture??