Slowly the higher elevation trails are emerging from under the deep winter snowpack. So this past weekend, I loaded up the Moots with some overnight gear and headed out for a ~24 hour stint complete with some sleep thrown in. The main goals were to test out some new bike bags that I had sewn, see how a SS rides under load (and how my legs feel about that combo), and get onto some trails I hadn't seen all winter. Once I toddled my tank up and over Rist I dropped down into Buckhorn Canyon and then quickly turned onto the always rough Moody Hill "road".  It had been ~2 years since this trail had seen my tread and man o man has it gotten rough. Oh well, time to shift into first gear (walking).  After all, this outing was intended to be a crash course SS bikepacking and not too many sections of the CT are on smooth flat roads. 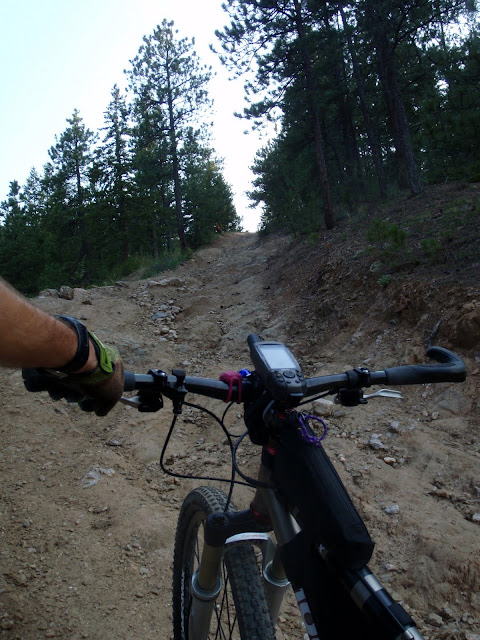 Once on Moody Hill, the first ~800 vertical feet look like this. 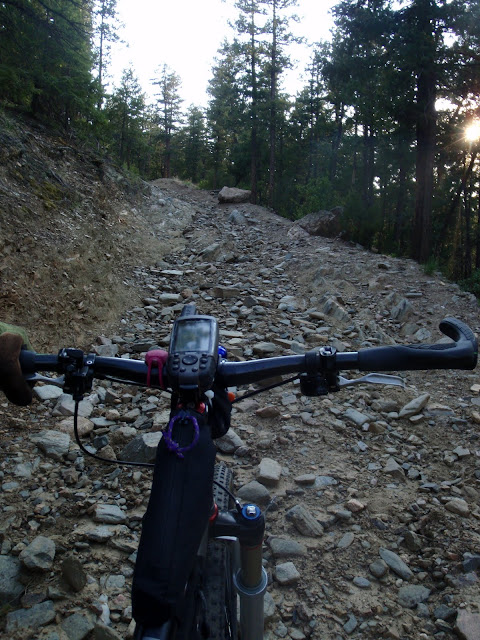 Then it flattens out a tad and the next ~500 vertical feet turn into this.
Riding a loaded bike forces changes in riding style but make that bike a SS and it changes the game all over again. At times it feels excruciatingly slow, however looking at what my exertion level was and the distance covered, I'm convinced it's not too far off of what I would of covered on a geared bike. Sure, there may be more walking involved but I'm under the impression that it's better to walk at 140 bpm than grunt along at the same speed and 170 bpm. 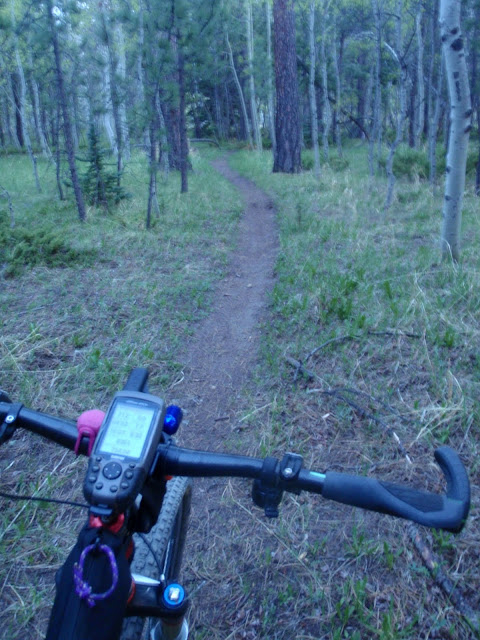 As the sun dipped below the horizon I was treated to one of the more colorful sunsets in recent memory thanks to all the smoke in the air from the fires in AZ.  The miles wore on and I got into a nice little groove as I hooked up with the Donner Pass Trail and found my camp site for the night near a little stream that provided plenty of cool clean water. 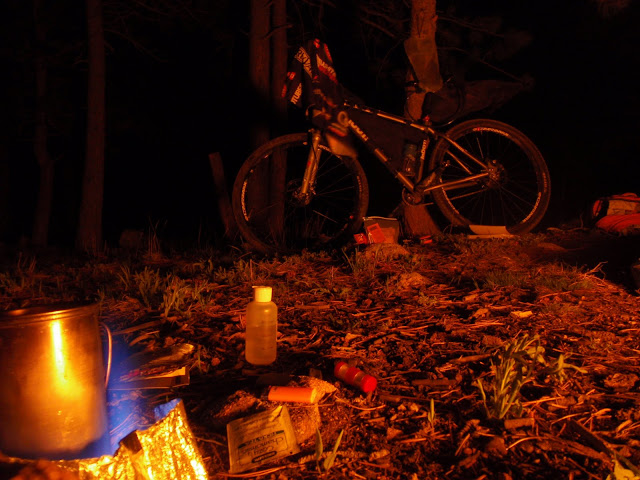 Since I was planning on a good nights sleep this go around I took along a few amenities such as a alcohol stove, a nice big sleeping pad, a down jacket, and even a book I've been meaning to finish. So, I set up home for the night, made a little fire, cooked some fine noodles, heated up some tea, read until the fire died, turned in for the night and stared at a sky full of stars until I fell asleep. 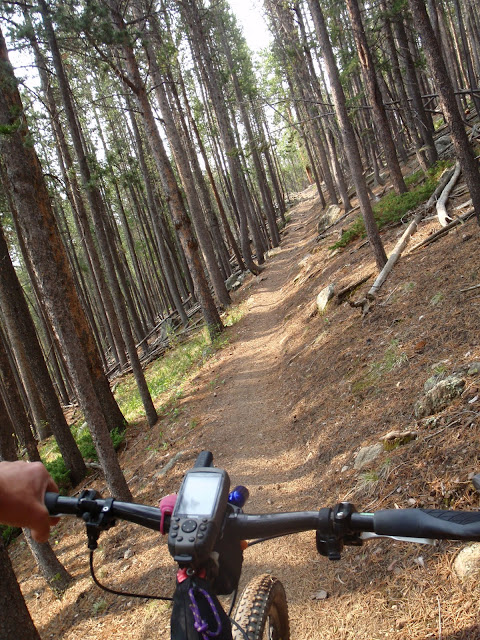 I was up at first light and watched the sun rise as I ate some oatmeal and drank some warmish coffee. I then retraced some of my route and headed back up Donner Pass for awhile just for fun before flipping a 180 and setting out in search of some new roads I've had a hankering to ride. 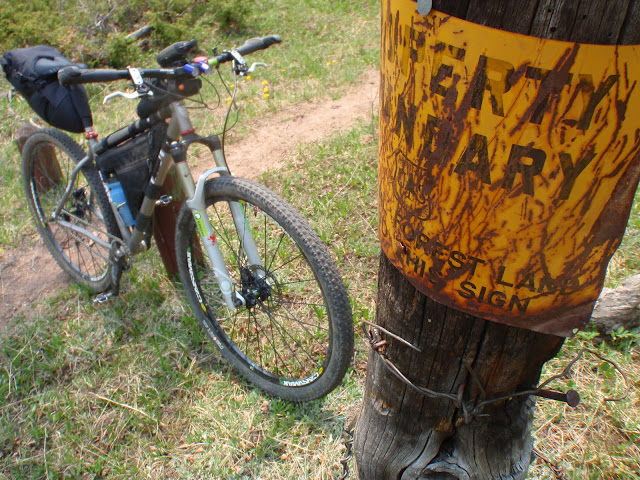 The rest of the day consisted of finding the end of quite a few roads and trails. Typically they either withered away into nothing, ran into private property (and usually a big gate), or ran into the Comanche Peak Wilderness Area. 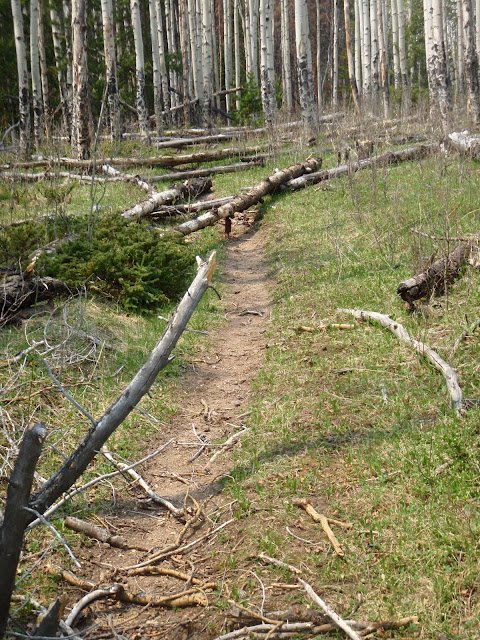 Some miles were hard earned. 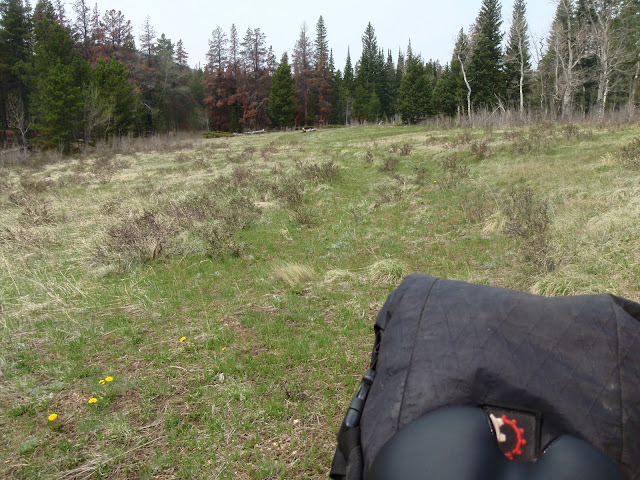 Yet others floated by under the tires. With a nice little breeze and temps in the 70's it was hard to complain about a few rough spots.
By the time I rolled home in the late afternoon I had accomplished everything I set out to do and even learned a few lessons in the process. One thing is for certain, a SS sure isn't the limiter I was anticipating even when loaded up. Once a groove is found between pedaling and walking, the miles sure do disappear fast.

Very nice! Get that CTR training under the belt!

That looks like a most-excellent weekend! Way to get out in it!