Way back in February, the brother and I signed up for the Park City Point to Point not really knowing much else other than it had rave reviews, loads of singletrack, and plenty of vertical. Needless to say, the course didn't disappoint, the organization was top notch, and the trails were superb. Myself and my equipment however, not so perfect. 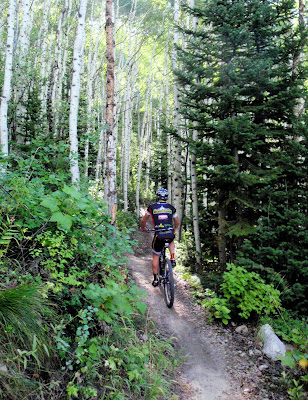 Bad photo, but the trails were amazing.
Race morning was a flurry of activity as usual, however once the gun went off I just couldn't get my gas pedal to go all the way to the floor. Perhaps 4 endurance races (including 3 100 milers) and 5 XC races in the past 8 weeks was/is stepping a little too close to the line?  Whatever the reason, I was off the mark from the start and what I wanted more than anything was to lay under a tree and take a nap. So, I just sat in and took it easy hoping to feel better, but the feeling never came. After the first aid station, we had a long singletrack climb up to ~9k, and it about did me in. I slammed some Coke at aid two along with some food but nothing would do the trick so I just kept plugging along. A few miles before the 4th aid, I caught a glimpse of my brother coming up behind me so I took a few minutes longer at the aid and let him catch me. We rode out together and started climbing up the last ~2k climb. Having the company helped but I still certainly wasn't anywhere near my A game. Regardless, I was having a ton of fun on the trails and riding with my brother. It's hard not to have a smile plastered across your face when railing mile after mile of such great trails. Then, out of nowhere, it happened. Somewhere around mile 70, part way down an amazingly flowy section in the trees, my bike all of a sudden felt like a wet noodle and my rear tire was rubbing against something. Which by the way, is a tad sketchy when going full gas. The drive-side chainstay had snapped just in front of the dropout. So in an instant I went from flowing at breakneck speed to walking. If railing that downhill through the trees was like riding a speeder bike in Star Wars, this was the part where the ship backfires, drops out of lightspeed, the stars go from lines to points, and you're dead in the water.

The walk of shame back to the finish took around an hour and a half but seemed twice as long with everybody whizzing by me on the downhills.  A few stopped to chat and I was actually in a darn good mood, because really what could I have done other than smile and shrug it off?  I'll be back next year.

To top it all off, this weekend is the grand daddy of one day races, the Vapor Trail 125, and I still have to build up a bike to ride. I wonder what it will be this year? Rain? Snow? Hail? Lighting? Yeti attacks? Bring it.

Lions and tigers and yeti's, oh my!

Holy crap. That's like 3 dead bikes for you lately..what frame was it this time?

Your new-bike-build the week before the race and 400 miles of recent racing trumps my sandbagging attempts big time.

see you there my friend.

Never ridden a scandium frame - I'm too scared of them to even risk it. Everything has been Al...