"You have to be willing to bite off more than you can chew, to overdose, and to fail. If you won't
risk the answer you won't ask the question. If you lack the will to ask then consciousness will not
unite with muscle and bone. I criticize such a lack of will (especially in myself) and ask, "What's
the worst that can happen?" The fearful part of me replies, "I may fall short of my expectations.
I may not be who I pretend to others. My perception of self may be proven wrong, very wrong."
The confident part of me says, "So what ... only after breaking myself apart may rebuilding
begin." So go ahead, break stuff. Break yourself on the once-hard edges of yourself. And recycle
the debris into the foundation of your future." - Mark Twight


I've had the above posted on various walls and in different houses however this summer it has taken on a tad more meaning. I wont sugar coat it, I've had a frustrating year. Busted bikes, bad weather, not enough time to ride, not enough energy, not enough stoke. I haven't always portrayed that on here, but it's been a somewhat defeating year and I haven't nearly lived up to my self imposed expectations. Sarah has her Bike Love theory and sadly, mine has been woefully slipping downward lately.
I had a big singular goal all winter in Grand Loop, which admittedly pushed me through the seemingly never ending winter. However due to said long winter, my plan was thwarted by snow up high in the LaSals, but not before the Paradox Valley claimed the first of many broken bike parts and even a few car parts. In May, I slogged for 18 hours along the Kokopelli Trail with Eszter in rain, mud, and chest deep stream crossings content is just being out there suffering. I used to tell myself that no matter if I finished first, last, or someplace in between I would suffer and not stop until I crossed the line. Last year when I dropped out of CTR it was the first time I had ever dropped out of an event in 10 years of racing. This year I have DNF'd three times, granted all of them were due to mechanicals and out of my control, but they each took their toll regardless. 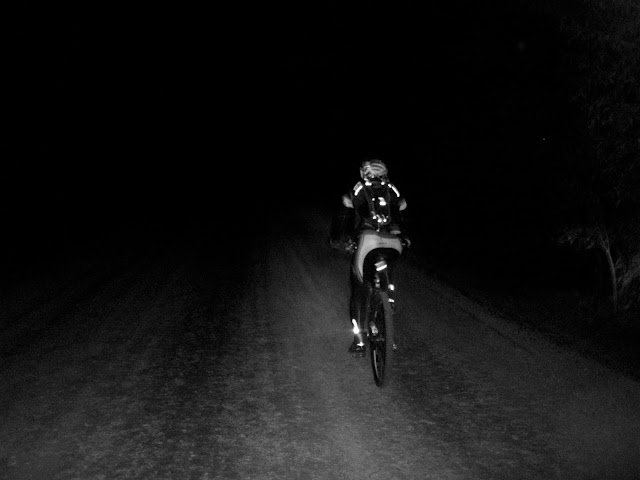 I was here Sunday at ~2 AM, heading up towards Alpine Tunnel
I've stood on 10 starting lines in the past 8 weeks and to be completely honest I wasn't fully excited to be on any of them. My stoke was just not what it usually is, I wanted to race well, but when the willingness to suffer is absent from the gun, it's a lost cause. I'm sure that my performances were not as bad as they played out inside my head, but nonetheless I convinced myself I was way off the mark and not working hard enough. Through it all, I kept my nose to the grindstone and know that on paper I'm stronger than I have ever been. However, when the time comes my legs can't live up to their potential because my head has already cashed out.

Standing on the F Street bridge Saturday night staring down the barrel of 125 miles of guaranteed suffering, I felt the same as I had at most every start line this year..."well, here we go again". No nervousness, no apprehension, no stoke. Not good. However, despite not having nearly the race I thought I was looking for and was capable of, something clicked over in my head. Granted not during the Vapor Trail itself but rather after it was all said and done and I was left hurting and bare. 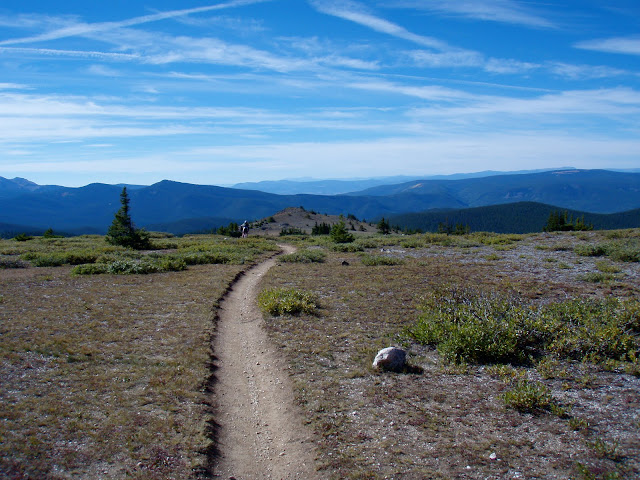 Monarch Crest after ~11 hours of riding/hiking and a night spent suffering under a cloudless (amazing) sky.
Monday morning I woke up sore, stiff, groggy, and for the first time in awhile, actually excited to feel that way. I can easily come up with plenty of excuses for a less than stellar ride: racing 6 days prior, too strung out, new bike and a different fit, etc. However, the fact of the matter is that I wasn't hungry for suffering. Plain and simple, I wasn't ready to hurt. Maybe it was the screaming barfies at Alpine Tunnel, maybe it was hiking and dragging a bike behind me at 12,000 ft. in complete darkness and then descending for an hour down Canyon Creek through changing aspen groves as the sun rose, or maybe it was riding for 18 hours with my brother and despite feeling like absolute crap, laughing my ass off whenever we caught our breath enough to actually talk. Whatever it was, even though my legs know that I thrashed them over the weekend, my head is finally ready for more. Lastly, the best part is that my legs have a whole month to get back into the game before I put the final nail into this seasons coffin at Moab. Flow on.

Two wins: That quote and the picture of Monarch Crest.

I'm glad you still had fun out there despite the mechanical and being absolutely smoked from so much bloody racing. I couldn't have finished with that many race miles in my legs! It was cool seeing you and your brother having a blast together. That's a pretty darn special thing to have right there.

Nice write-up amigo! Sometimes it's all about just making the finish.

Andrew...rest up buddy for moab madness...i'll be there supporting BWR...and keeping an eye out for the twight-like willingness to recycle yourself into your future. Leave it all on the course cause i'll help put pieces back together in your pit. Set up next to Brad....
Kat Gro

wow man heading towards the goal early in the morning nice to see that....full confidence and great stamina