Well, another Breck 100 is in the books and truth be told, it didn't go exactly to plan. Physically I was ON the whole day, mechanically the new bike worked amazing and even though I built it 2 days before the race, it didn't even have so much as a single missed shift. The problem was that the course changed race morning leaving me and everyone else who knew the course at a loss for memorizing what was posted online. So my confidence in knowing the course ahead was gone and it was now a mystery. The gun went off, I rode the first lap rather conservatively and rolled into the pits in 2:55. No matches burned and lots of food eaten. 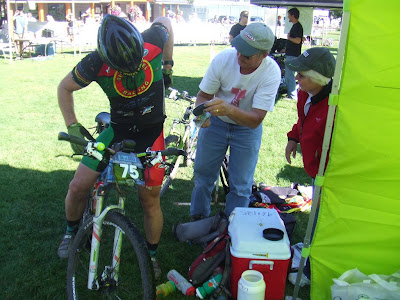 Picture stolen from JK with no real permission.
I swapped bottles and headed out on the 2nd lap which was basically half of the Firecracker in reverse. Up out of Carter Park, over Sally Barber, then up Little French where I made a point to walk across the stream where I tore my tire 2 weeks ago. After a screaming fire road decent and the first aid station things got interesting. I was climbing on a fire road and hadn't seen a course marker for awhile so I turned around not wanting to get off course like last year. About 1/2 back down the road I ran into another rider who I believe was Shawn Meredith. However since we've never actually met, I'm not 100%. Anyway, he had a course booklet so we consulted it (it was fairly useless without any sort of actual map, just directions) After awhile a few more riders joined us and we continued on what we thought was the right road. 4 miles and 1200 feet of climbing later (I topofusioned it at home) the road ended on a saddle.....um, crap. So now we had lost a good 45 min. So bomb back down the road to where we found a bunch of other riders milling around at a turn (the arrow was facing the wrong way meaning you had to ride past it and look back to even see the damn thing) So onto the Colorado Trail I went in a fit of rage. Basically for the next 50 miles I was fueled simply by rage and frustration at a changing course, missed markings, and getting off course for the 2nd year in a row and spoiling what turned out to be a darn near perfect race physically. Due to the extra time, I also ran out of water on lap 2.

Lap 3 also held a little surprise. I was expecting the paved/gravel climb up to Boreas Pass.....nope, we took a steep as hell, rocky, and at points very badly marked trail up. I was however, still running on anger so it only helped to fuel the fire. I BOMBED the gold dust trail into Como. We're talking big ring on the singletrack at times. In fact, I passed my brother since he had passed me when I was lost. I came up on him so fast I hardly even knew it was him until I had passed him. All I could get out of my mouth was something like, "you have no idea how pissed I am right now". Before I knew it was was past him and wondering if I should of slowed to ask how he was doing. Either way, caution was thrown to the wind and I pounded out the miles into Como and then back over Boreas to the finish. My 3rd lap time was 3:27 which says how fast I am capable of riding at the end of an event like this......I just lost 45 min riding up the wrong mountain again. 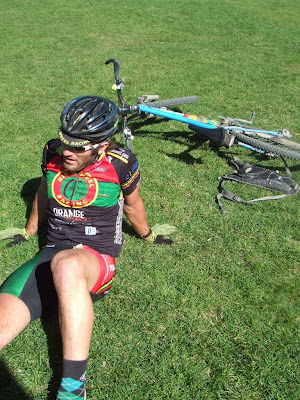 All told, I finished in 10:33 which was an hour off of my goal time of 9:30. I think if the course was what I was expecting and I hadn't gotten off route, it was certainly within reach seeing how good I felt all day. My time put me 2nd in my age group and somewhere around 11th or 12th overall I believe. I'm not going to go into too much detail about my thoughts on changing the course etc, but when I had a great day physically with absolutely no mechanical problems despite a new bike, getting off course on a section that made it's way into the race at the last minute is certainly a tough pill to swallow. 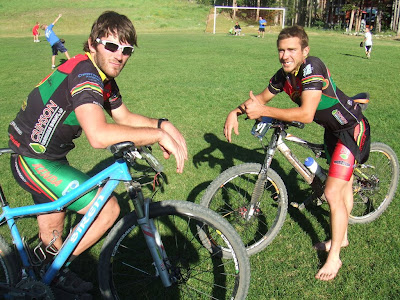 Either way, Sunday the brother and I headed back to the Fort early to "race" in the New Belgium Urban Assault race. Good times were had, good beer was drank and I believe it was the best recovery I could of done, both physically and mentally after a disappointing Saturday.

Now, on to the fun stuff. The new bike. Brenden came to my rescue last week when my Yeti frame bit the dust (It is under warranty however). The mailman dropped off the frame on Wednesday and I got to work building it up. The build went super smooth and bottom line is she rides like a dream. Prior to the Siren, I've only had about a total of 20 min on a 29er and not having raced a hardtail in over a year I was a bit nervous about lining up at Breck with it, but she worked perfectly. After the first lap, I was over FS bikes and in my mind was no longer calling it mountain biking....it was now monster truckin'. I'm no expert in reviewing frames and really nobody should trust my opinion, but dang it is a sweet ride! Stiff, snappy, and rides like an extension of my body. Carving turns is like being in a dream and climbing....well, the monster truck aspect comes into play here again. Bottom line is, I'm diggin it!! 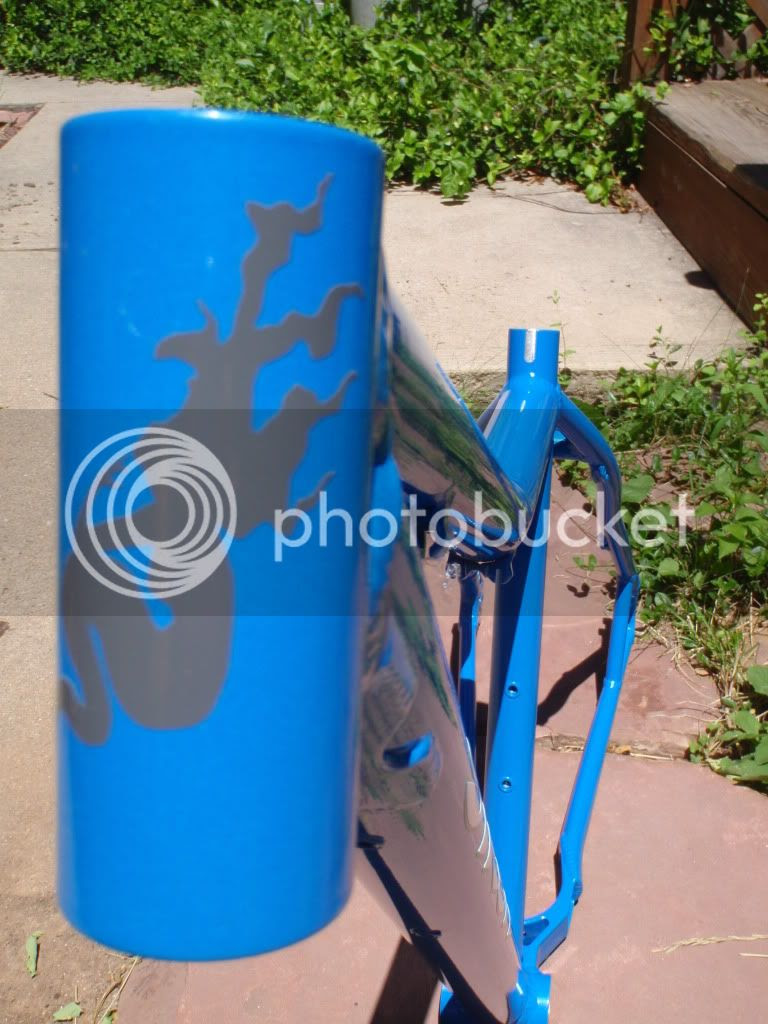 Here's how she sits now: 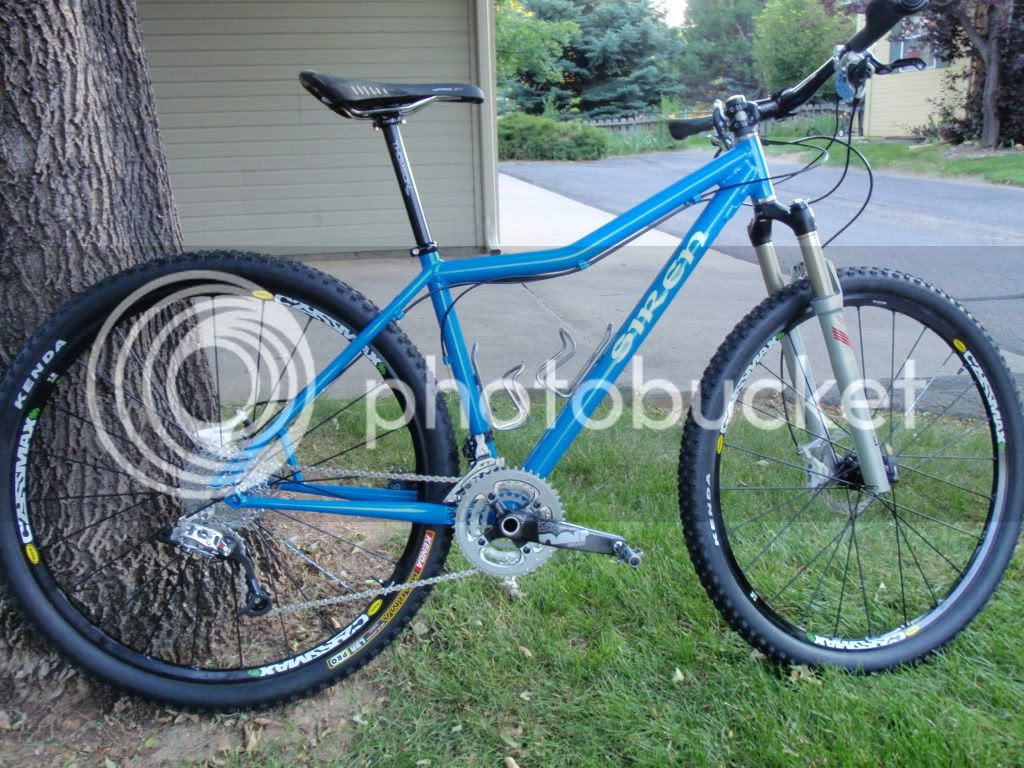 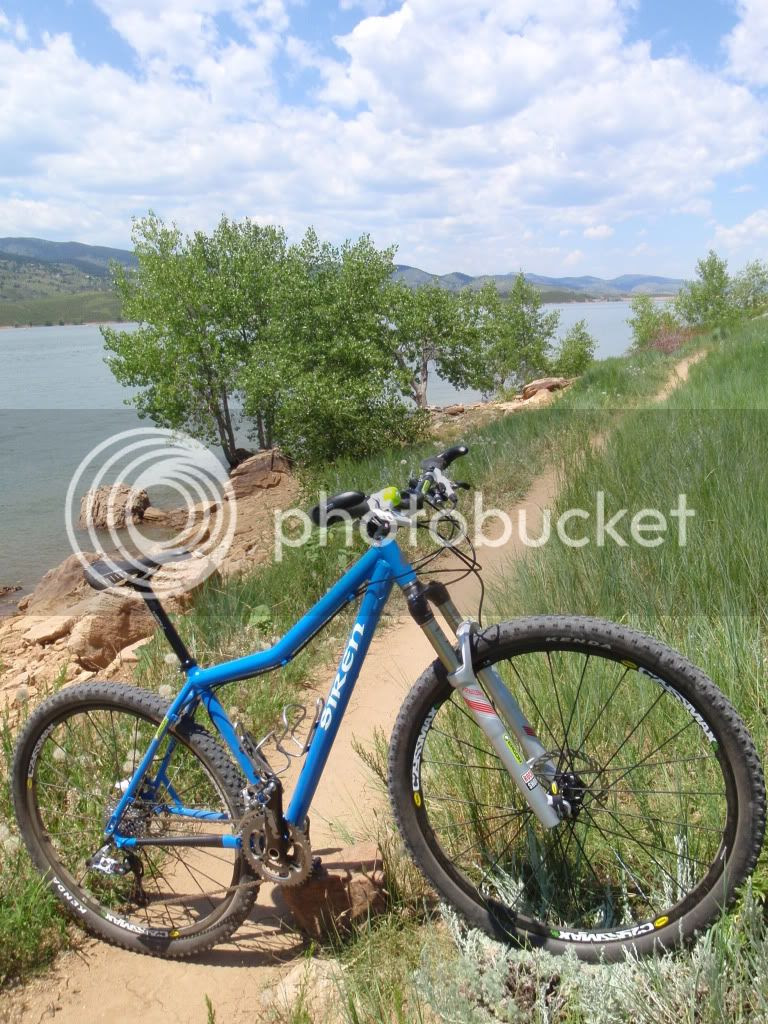 I think I may go monster truckin' tonight...

Hey man, way to not let up and use the anger. I just felt defeated.

I agree with your 'pissed-ness' about the course changes.

My riding partner was riding a SS so we went up last week and drove Boreas Pass, just to make sure his 32x20 would work. No problems at all...or so he thought.

I was on a geared bike and I was so furious at the Loop 3 change that I nearly came completely unglued mentally. If I was riding a SS I would have thrown it at Thane when I got back to Carter Park.

The conspiracy theorist in me believes that Thane didn't want Schalk to beat Tostado, so he threw in the Indiana Gulch section last minute so that Josh would know what he was riding and Jeff wouldn't. My guess is that Jeff would have given Josh a much bigger run for the money on the original Boreas Pass Road climb and Thane knew it. But that's just one guy's opinion.

Bottom line; if you want a race to be legit you shouldn't be pulling bush-league stunts like last minute course changes. O'Day wouldn't do it at Mohican and Rick Plite sure as hell wouldn't do it with the Lumberjack!

And since I just hijacked your blog, nice job and way to battle back in!!

You hauled ass on Loop 3, awesome! I've never seen you pissed...kinda figured you never ever get pissed. Guess I was wrong. It's your secret race weapon! :)

Get some *real* tires on there and you well really feel like monster trucking!

You pulled through amigo - good job there. Impressive last lap for sure. Good to see you guys and sorry for not sticking around - we saw chance to spend Sunday at home and we took it.

Just ran into Hemperley and got a juicy tidbit about firecrackers and wild turkey. LOL. Wish I had seen that!

Whatever Hemperly said is a lie!!!

Ok so maybe not so much.

I don't remember any fireworks for some reason?