Had another good weekend of saddle time. Yesterday I hit up the Oval ride which was interesting to say the least. First off, Tom Danielson was in attendance which pretty much guaranteed a fast pace and secondly the addition of a gravel section to the route in the early miles threw another wrench into the mix. I thought the new dirt section was intended to be mostly neutral however once we hit it the ENTIRE group shattered. I'm perfectly comfortable fish-tailing on gravel at speed but quite a few others weren't which because I hit the section mid pack ment I had to work my way around alot of traffic. Once past the gravel I found myself with a group of about 12 or so. Some of us worked together and wittled the group down a bit and as the miles ticked by we picked up a few others around Windsor. A bit later we met up with the Danielson group when they stoped at a turn near Johnstown. I jumped and rode with the lead group for a bit before missing a turn because apparently I was asleep at the wheel. Sidenote - I got almost no draft off of TD because he has the aerodynamic profile of my left thigh :) After the turn I met up with the next group and we worked together to Carter. It was at this point where I discovered that my left shifter was stuck for some unknown reason and I couldn't shift down to my little ring - no biggie, it just made the climb a bit more of a grunter. Once up Carter I had to chase awhile to catch back up but finished the day quite satified....and tired. 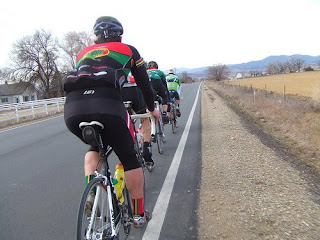 I didn't have a camera so I stole this one from J-Kizzle of the chase group heading towards Carter. Note how JK rides in the gravel to up the difficulty a bit :)

Today I had 5 hours on the slate and was dreading every minute of it because the weather foks were calling for freezing rain and snow all day. However once again they were way off and it was mostly clear and in the low 40's. So, I suited up and headed up to Red Feather Lakes by way of some roads that I'd never been on. Good day - I'm hungry.

I burned too many matches in the early parts of the ride. I paid for it dearly heading to Berthoud and points beyond. Ugh.

you'll be a roadie only before long.....it's a natural evolution that every mountain bike racer goes through.