Well, it was a Carney cleanup at Seven Oaks this weekend. I won the 24 and Stephen won the 12 hour just a month after having his tonsils removed and undergoing wrist surgery. Here's how it all went down.

This was my 4th year racing here solo, the first year I finished 3rd and the last 2 years I finished 2nd, so it was pretty personal for me to finally win this one. The course took a beating this year because of all the rain but the guys at singletrack promotions did a great job getting it ready. It was hands down the most difficult course to date, but I loved it. Each lap was about 8 miles in length with around 1,700 ft of climbing per lap....lots of off camber trail and TONS of short climbs....good stuff!

After the usual race morning mussings we lined up and waited for Troy to get the fun started with his shotgun. One shot to start the race, and a 2nd for the last person on their bike....just kidding. 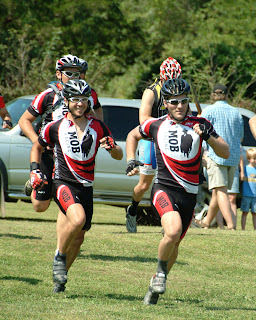 Stephen and I about 2 seconds in....look at that perfect ex-triathlete running form!

My goal for the first 12 hours was to keep things super chill and keep the HR below 150. So I sat in and did my best not to take off since my legs wanted to rage! 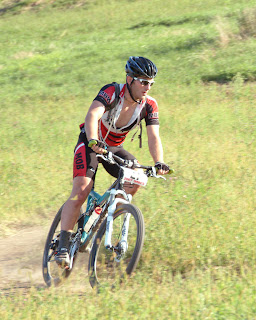 This year there was about a mile of additional trail on the front face of the ski slope consisting of several large open switchbacks. Some folks didn't care for it, but it wasn't too bad and after it all gets worn in a bit it will make a great addition by allowing more space to pass. Also, the last switchback passed right by pit row, allowing me to yell what I wanted to my pit crew before I got too close. My pit this year was headed up my my roomie Dave and he was hands down the best pit crew I've ever had (sorry mom and dad....but he can run faster). For the first 8 hours I didn't get off the bike or even really slow down through the pits as he just ran along and handed me what I needed. 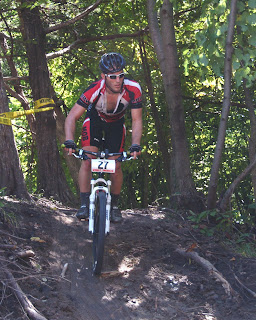 I kept on my pace and for a few laps myself and the other top 2 solo riders were within a few hundred feet and trading positions. I knew what effort I could sustain for the entire race and just relaxed. Some time around 9 PM I took the lead and kept it. I kept things steady all night and amazingly felt super strong. My legs felt fresh as a daisy the whole race and the only thing that started to slow me down was a sore rear end. I haven't had to deal with "swamp ass" in quite some time and it was starting take its toll. I just stood a bit more and kept on the gas. 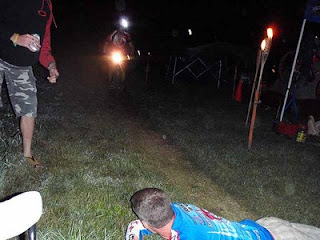 During the night, the rest of the MOB crew had quite a little party going and every lap they laid something down for people to bunny hop.....beer cans...pizza boxes....Sedore..... and yeah...I cleared them all.

I love night riding at races, so I kept things steady and kept the pits super short only stopping to eat some pasta, coffee, and a change batteries. I came in around 5:30 AM with a 2 lap lead over 2nd place and 4 laps over 3rd. So I sat down and ate some more. I ended up doing one more lap for a toal of 18 before I called it a day. My legs felt amazing and I easily could of ridden more...except for having to stand most of the time....and the Vapor Trail is this weekend so I wanted to save as much as I could for that. I've always had a personal goal of 24 laps but it's never happened. So at about 7:30 I was done. 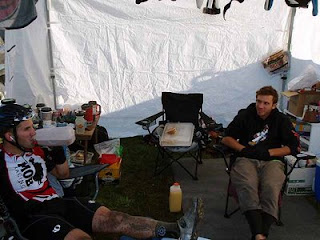 Chillin in the AM....with some delicious chocolate milk!! 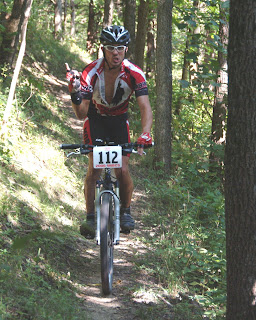 My bro crankin on his way to the 12 hr title
Wrist braces are soooooo in this season!! 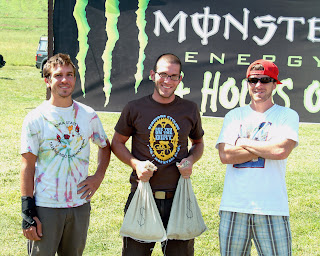 Before the awards I hung around and chilled with the other solo riders. I finished with 18 laps, Jesse Bergman finished with 16, and Matt Gersib had 15. As for my race booty....$1,200 in dollar coins....I could hardly lift them all! I think I'll just spread them out on my floor and roll in them for a few days to enjoy them all.

A big thanks to everyone at Singletrack Promotions on putting on yet another great 24. The trails were just the way I like them!! I for one, liked the addition on the front, keep up the good work. Also, Dave and my rents kept the pit running like clockwork! Also, congrats to everyone else who raced, it was a brutal course and it seemed to take it's toll on some.