Firecracker 50, and then some

Stephen and I arrived in Breckenridge for the Firecracker 50 early on Friday morning. We had plenty of coffee on the drive and were ready to race. The start of the race itself is the start of the 4th of July parade in town so the start staging is a bit chaotic. Regardless, I was racing in the Maverick category as I was too cheap to buy a USAC license this season. I lined up and waited for my gun to go off.

Lap 1: 2:23, The gun went off and my class was off along with the teams and single speeders. All told, it was a huge group and the initial streets in town were a little chaotic. People wanting to be in front and not paying much attention to where they were riding made for an interesting few minutes. After getting out of town the first climb started. I knew it was around 8 miles in length and right off the bat people kicked it down and started to grind away. I just rode my own race and kept the HR low. My race plan was to ride a easy and conservative first lap and then give it everything on the 2nd. Before long on the first climb I started to spin past people who were gasping for air....too fast too soon eh? I kept things steady the first lap and felt great. I could of drank more water looking back but overall things went well.

Lap 2: 3:00, By the time I finished my first lap it was friggin hot out. I kept the liquids coming in but it wasn't enough and I was loosing the battle. About 1/2 way up the initial 8 mile climb I lost power and had to slow down. My HR was still fine, just no power. I tried to catch up with the hydration, but it was too late. The 2nd lap beat me into the ground. The course itself is pretty rough and I was using my hardtail so basically it was a 50 mile beat down. In my opinion the downhill sections were not enjoyable at all because they were fairly rough so I stopped having fun and then things start to go out the window. I finished with a time of 5:23 which was quite a bit slower than I was shooting for but I didn't really know what the course was like so I'll be more prepared next time. 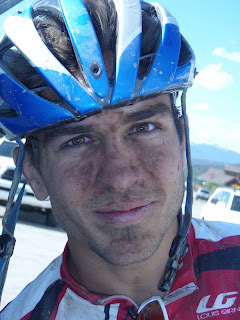 Stephen finished with a strong time of 5:37!

After watching the fireworks from the back of Stephens truck on Friday night we headed out for some more riding on Saturday: 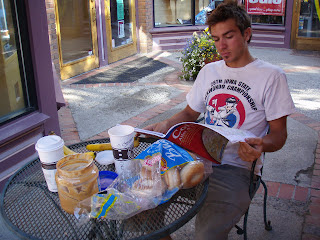 But not before a hearty breakfast of bagels, bananas, and COFFEE!!

We decided to do some Colorado Trail recon and headed out to hit up the section from Breck to Copper. We put in a 4.5 hr ride and found some pretty cool sections of the Colorado Trail and some other trail networks around Breck. It was sweet! 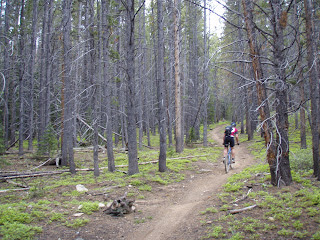 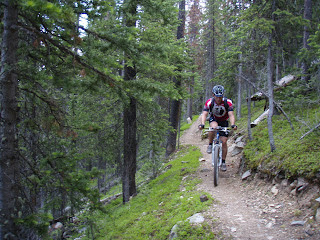 Some of the most beautiful trails I've ridden. 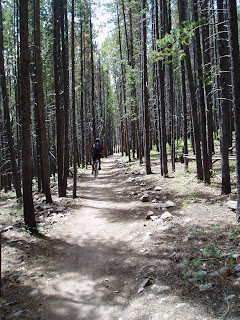 Our legs felt surprisingly good after the race, and we were having a blast riding these super buff trails. 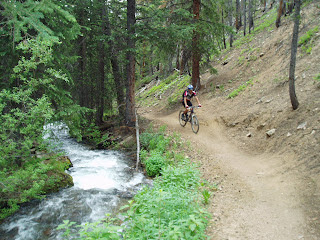 This is the trail that runs from Breck to Frisco....super sweet! 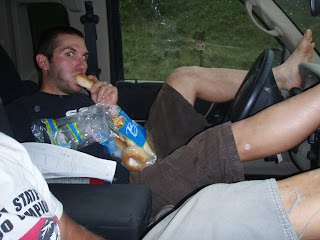 We rode the last few downhill miles in rain and hail with lighting cracking right over our heads. Perfect timing as we got back to the truck just as things really opened up. But we were done and it was bagel eating time!

I'm headed back to Breckenridge in two weeks for the Breck 100... it's gunna hurt!

You call that a jar of peanut butter? Ha!

My recomended dosage is 1 per week.

Great job Andrew, holy cow that race looks like it hurts! ...and now you want to do a 100 miles of it? You are more man then I. Nice job!!