Friday evening, Stephen and I headed out the door for a overnight bike-packing trip in to the mountains west of Fort Collins. However, before I recap the trip, take a good long glance at the elevation profile..... 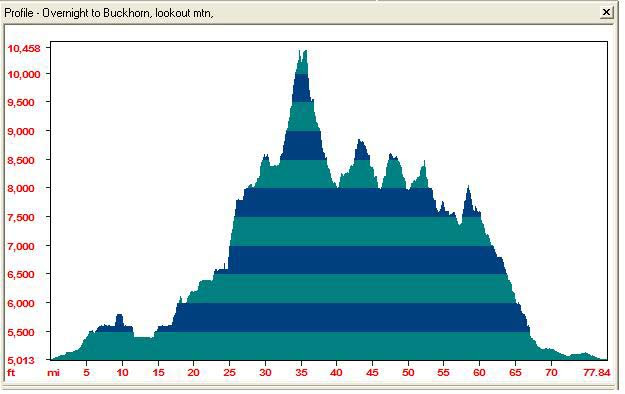 Just shy of 11,000 ft of climbing, and here's why we felt every inch of it...
After the initial 20 or so miles of pavement between Fort Collins and Buckhorn Canyon, we turned onto Buckhorn road. It's gravel, but super smooth. However, by the time we got there, the sun was already behind the mountains and in the valley it was getting pretty cold. So, after only a mile or two on Buckhorn, we turned off onto a 4x4 road that caught our eye. After only a few hundred feet on the trail we were reduced to hiking and pushing our steeds. However in the trees and off the valley floor the temps were much warmer so we kept going. After about 20 min we were already a few hundred feet above the valley and had a great view of the sunset over the foothills. Then, around a corner, a Toyota Tundra came roaring past us, bouncing up the trail, well, pretty dang fast. The girl driving muttered a "hey" as she passed, probabibly thinking, "wierdo's... who pushes their bikes up this crap?" After another 20 min, it was mostly dark and we kept trudging on. About another 1/2 mile up the road, we caught up to the girls in the truck. They were stuck...HA, who's laughing now!! So after half an hour of Stephen and I attempting to guide them, I ultimatly, got in the truck and with stephens help, backed it down the trail and managed to turn it around with a masterfully executed 12 point turn. Not an easy thing to do with a big truck on a narrow 4x4 road in complete darkness! In the end the two girls couldn't say thank you enough. I'm fairly confident that if we wouldn't of helped, they would of spent the night in the truck. For our efforts, they gave us some Sunshine wheat, which made the night hiking that much better! 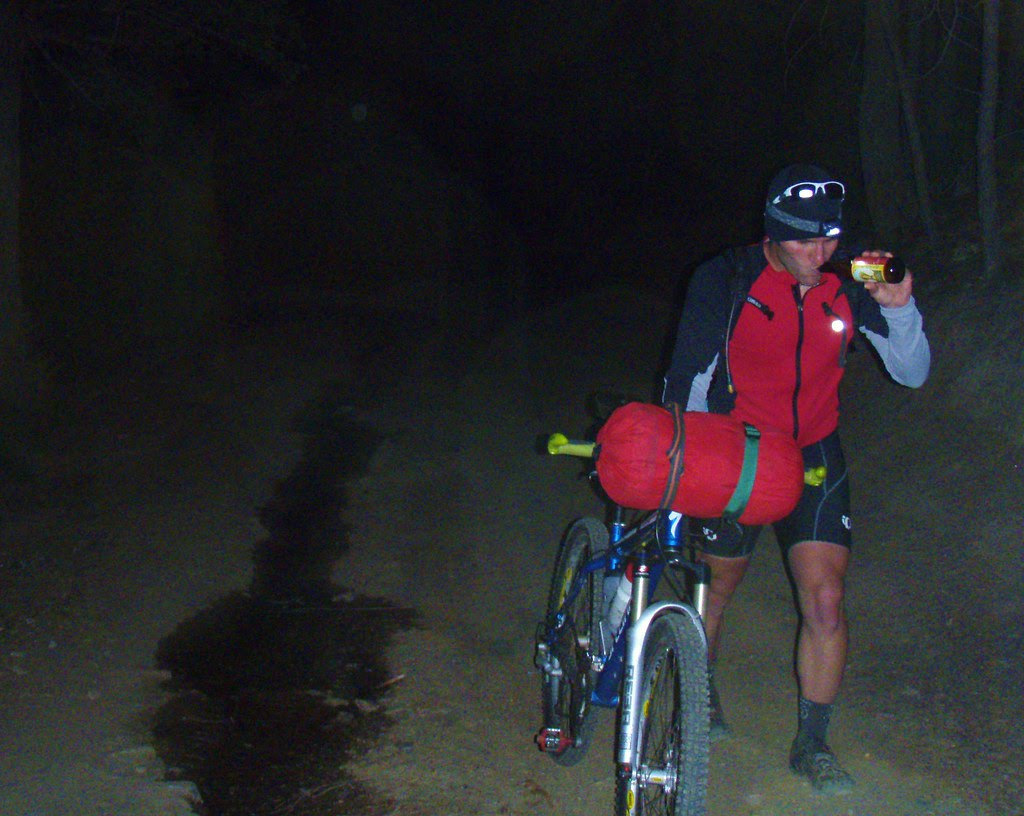 Hike-a-bike with my reward! 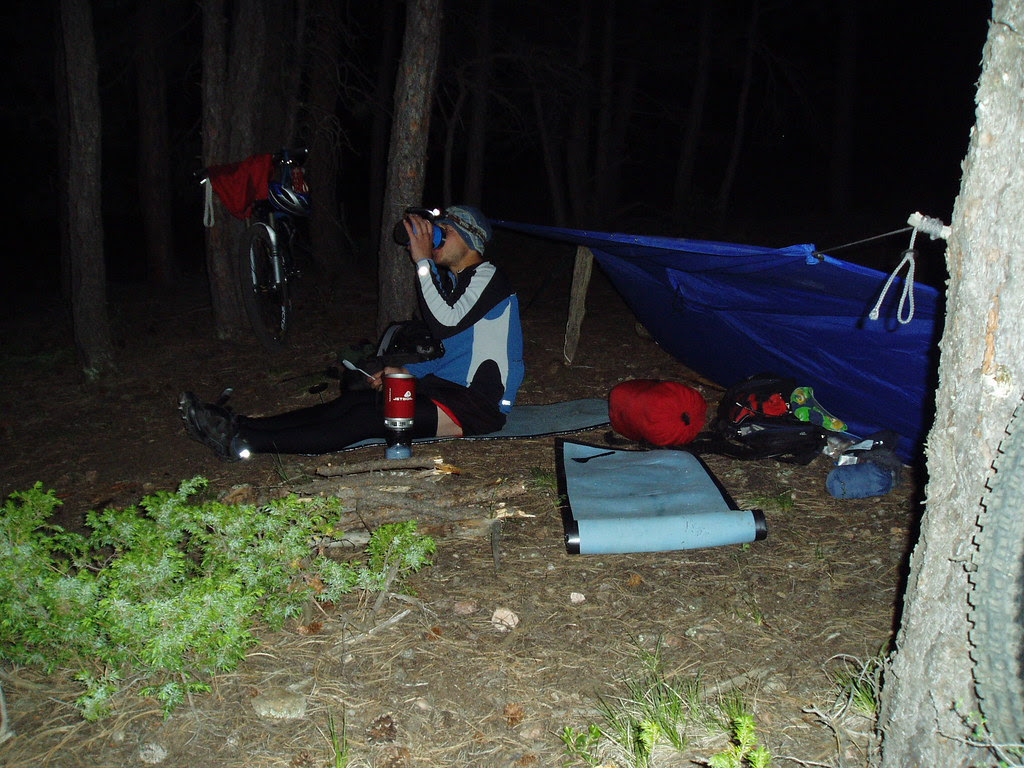 After some more riding/hiking we found a camp for the night around 10:30. Ramen was cooked and devoured in about 5 min flat. The tarp worked great and kept us out of the wind as we both slept great. 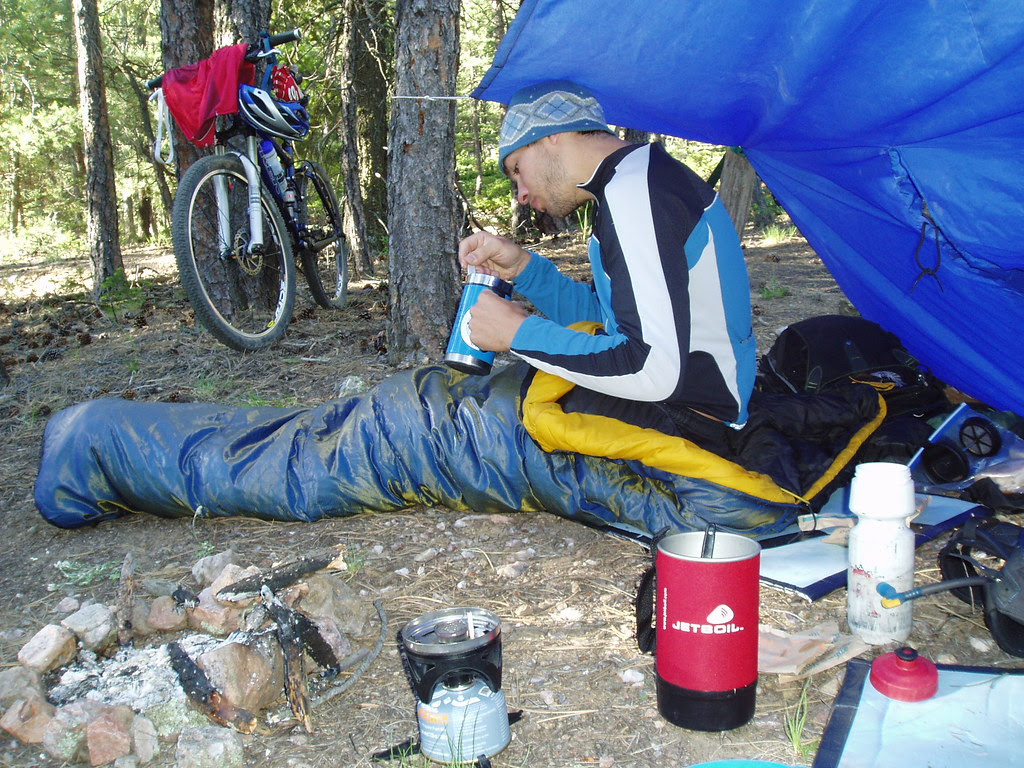 Breakfast time! Oatmeal and lots of coffee make a great start to the day. We were packed and rolling a little after 7.

The day started with more 4x4 road which ranged from super-steep hikes to nice road like this. However, one thing remained constant, we kept climbing up and up. 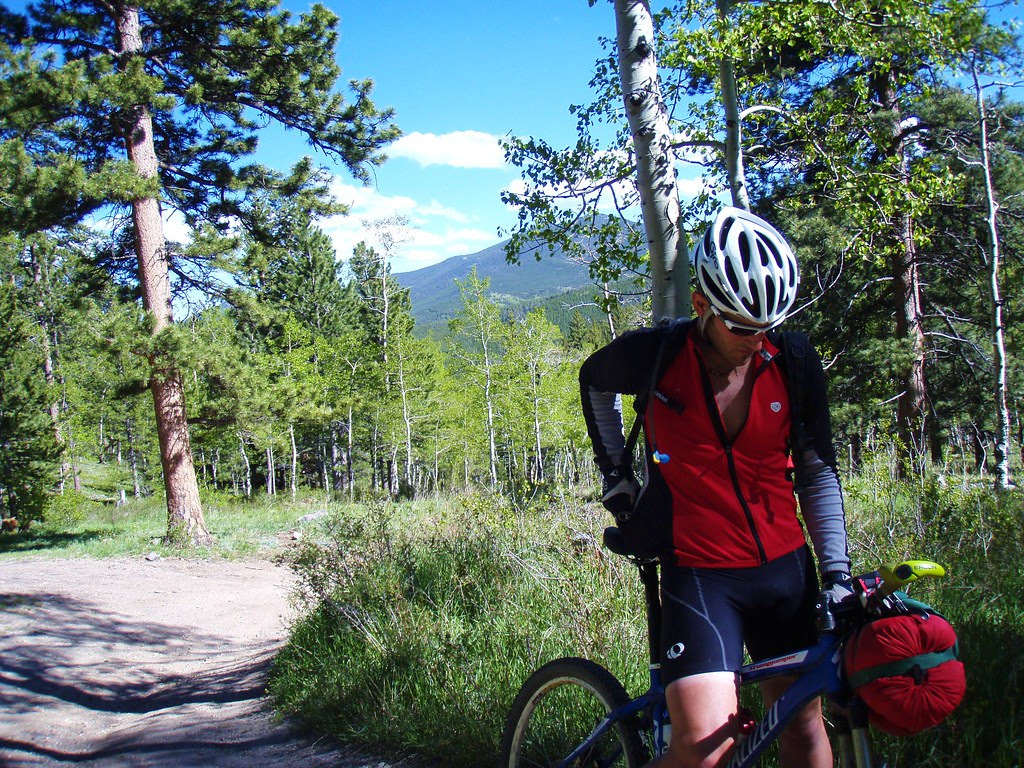 The general plan for our route was to follow the 4x4 trail we were on to Donner Pass trail and ride that up and over Donner Pass at 10,400 ft near Lookout mountain and then down to the ranger station along Buckhorn road. On the map, the trail is designated as singletrack and I had seen the section near the ranger station and it looked pretty buff. Also, the singletrack was really our only option other than backtracking. After some initial problems finding the actual enterance to the singletrack and stumbling upon a random wedding in the woods we found the trail, and it looked sketchy. Turns out that it is a dirtbike trail as well, and as a result it's super loose and real gnarly. It's like trying to ride up a full on downhill course with a stream running down the middle. So to put it lightly, we pushed and carried our bikes for the next 3.5 hours up 2,500 ft of boulders, streams, logs, and super loose rock. Not one section was rideable going up and wouldn't even be remotly fun going down. Unless you're bike has an engine, then it would be bearable. 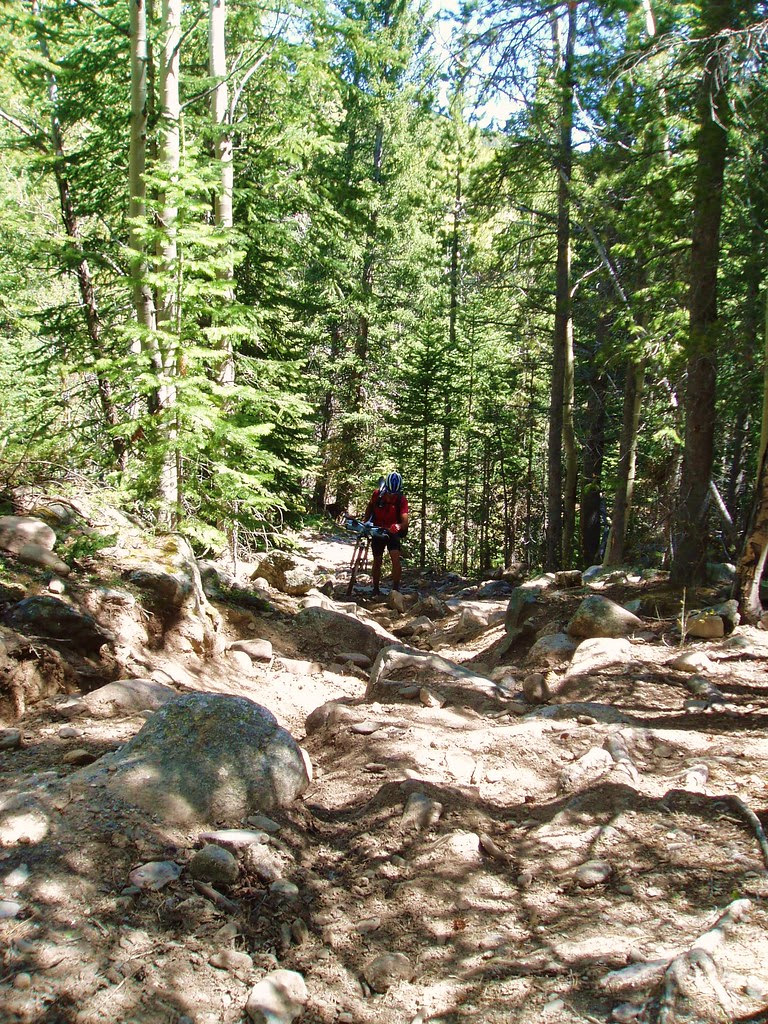 About half way through the 3.5 hour hike our patience started to fade. Ever hike for 3.5 hours over big rocks while carring your bike on your back because you can't even push it up over the rocks....while wearing cycling shoes?? I'll save you the experiment, it aint fun! Good thing we're brothers and know how to deal with eachother and not get angry! 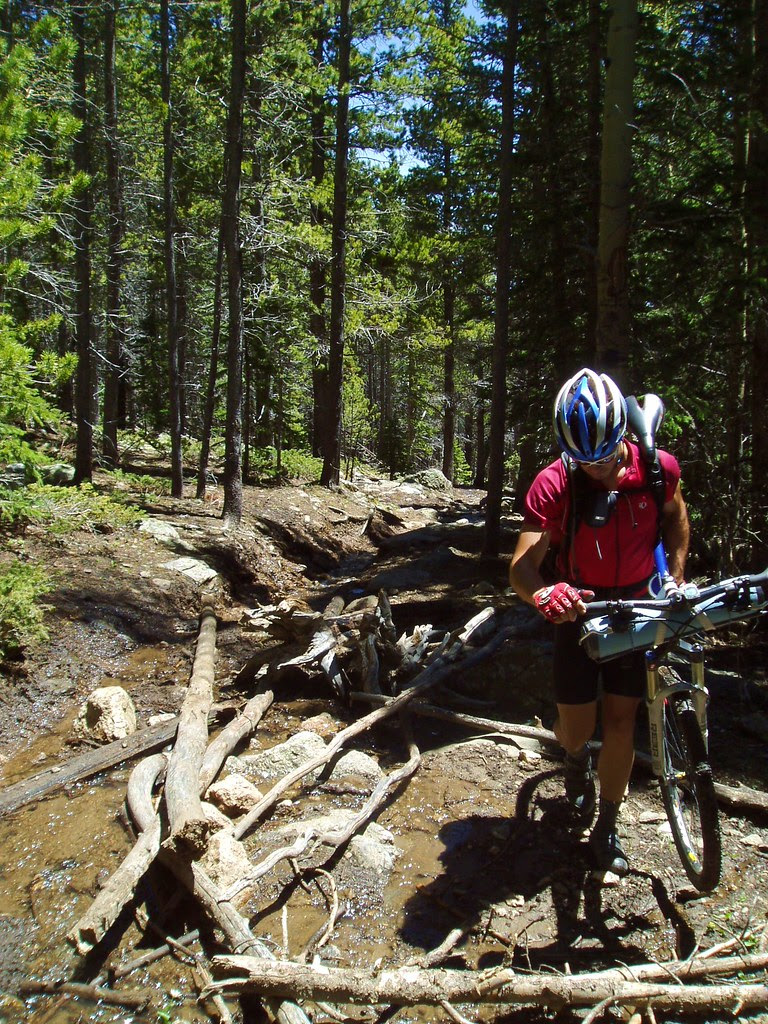 Atleast our feet kept cool from the stream that ran down the middle of most of the trail! If I was ever going to throw a bike into the woods, this was the moment.
After the 3.5 hour "fun walk" we arrive at Donner pass at around 10,400 ft. Since we were already that high we decided to hike/scramble another 1/2 mile to the summit of Lookout Mountain at 10,650 ft. We ate some lunch just below the summit before heading up top. I'm not going to say the view was totally worth it, afterall, my feet were on fire after hiking/scrambling in cycling shoes for close to 4 hours, but it was an amazing view over almost all of Rocky Mountain Natl. Park, Estes park, and I'm fairly sure we could almost see Nebraska. Afterall, it was a perfect day, not a cloud in the sky! 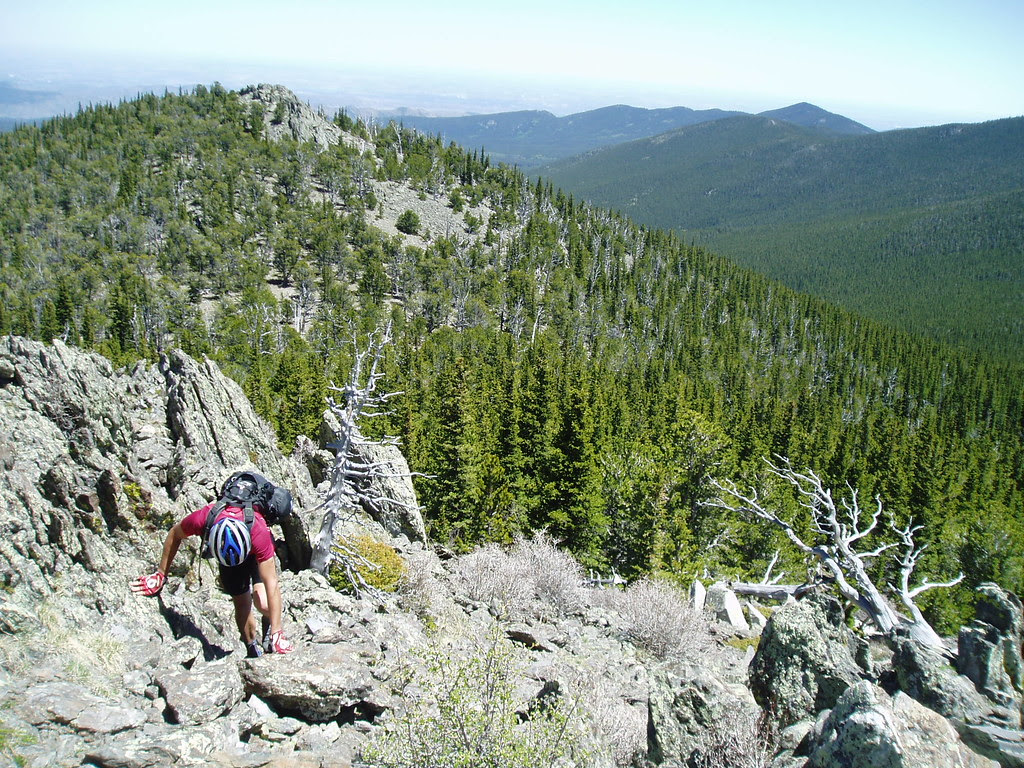 Stephen taking the last few steps to the jagged summit. 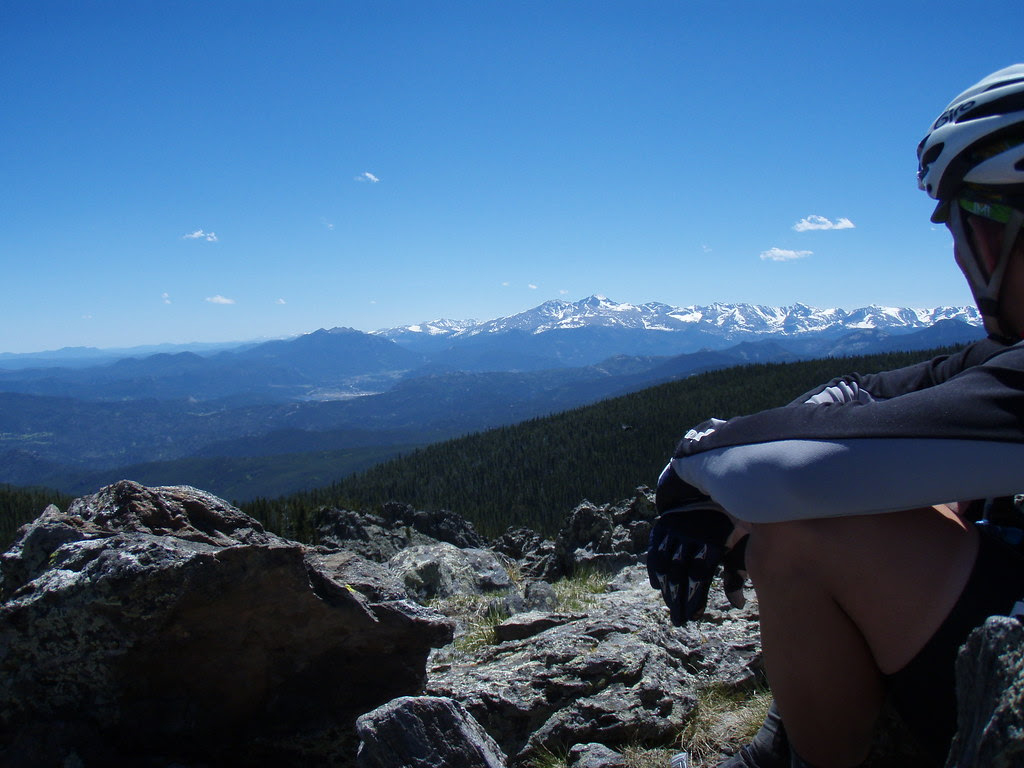 It was perfect on top. If you look in the background, you'll see the North face of Longs peak, including the Diamond. Also, on the left, about mid frame, is Estes park! This is about 5,500 feet higher than my house, not bad!

Pano time! We took some larger ones, but we're still playing with them and making them all purdy!

After chilling on the summit for a bit, we headed back down. Once back down to Donner pass, a guy on a dirt bike stopped and chatted with us. We had seen trail crews out all day on the trail, however this guy explained to us that he has been riding/maintaining the Donner Pass trail for 25 years and we're the first mountain bikers he has ever seen on the backside!! After hiking up...we know why! Most people do the front side once and never return, however, it was all downhill for 2,400 ft to the ranger station for us. 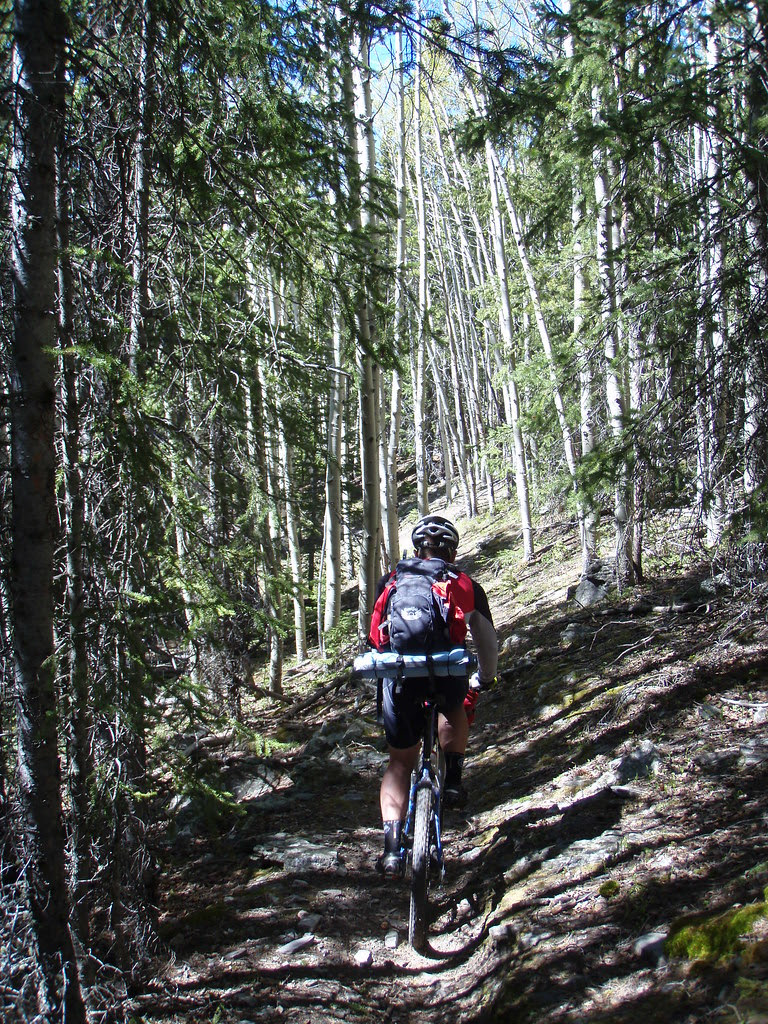 Even going downhill was super gnarly on Donner Pass trail. Not nearly as bad as the backside, but still a body beater!
Once at the bottom, we filled up with water and scratched our original plans of heading over Pennock Pass for some more exploring and headed up Monument Gulch instead. The 4 hour hike sure did bite into our millage! We'll have to make it up over Pennock another day! 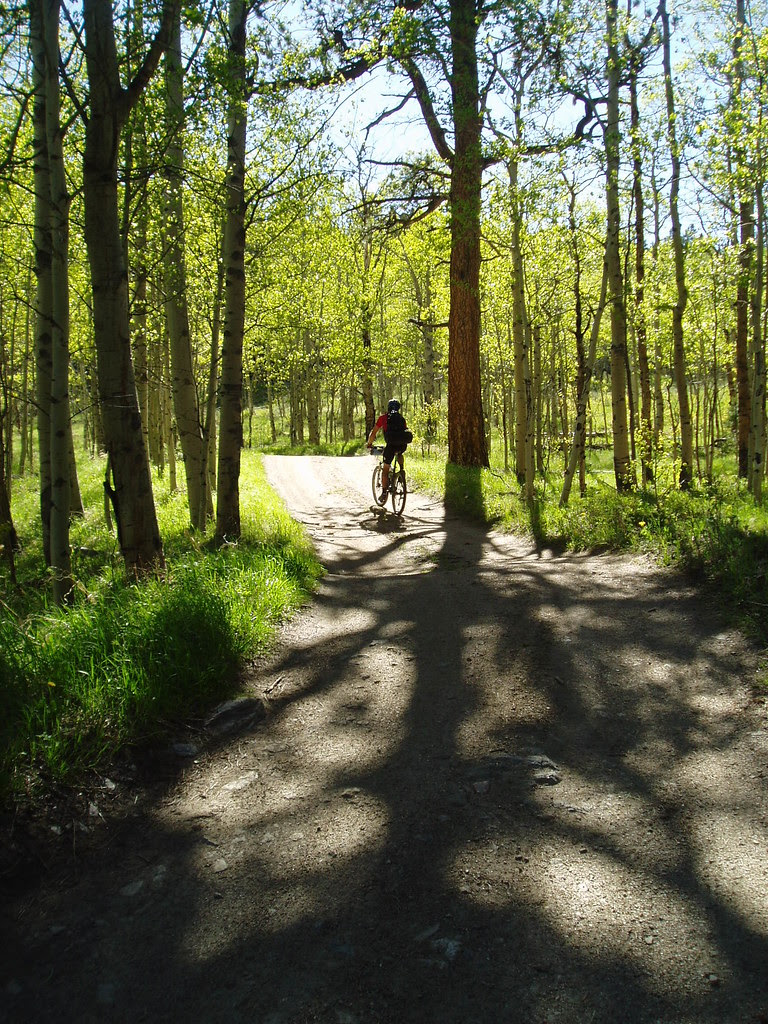 Monument Gulch. With riding like this, the downer of hiking quickly fades. 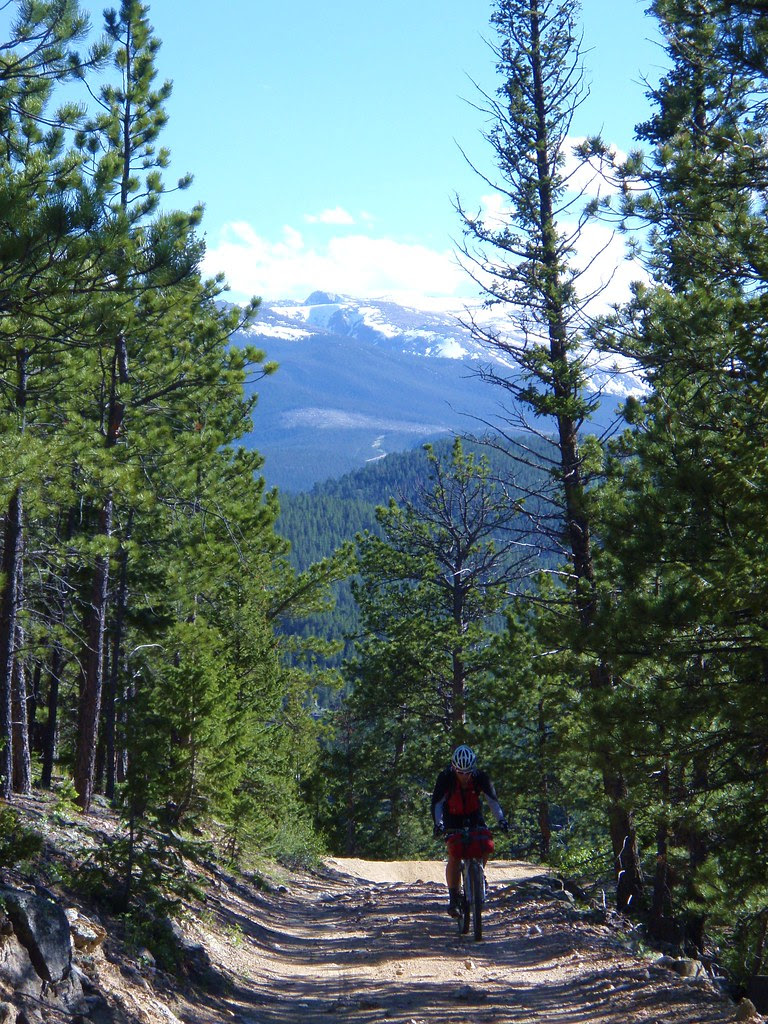 We then hooked up with Old Flowers road and dispite being on the move for about 10 hours at this point, we both found a second wind and rode super fast down old flowers and even sprinting against eachother a few times. Once again, great views! 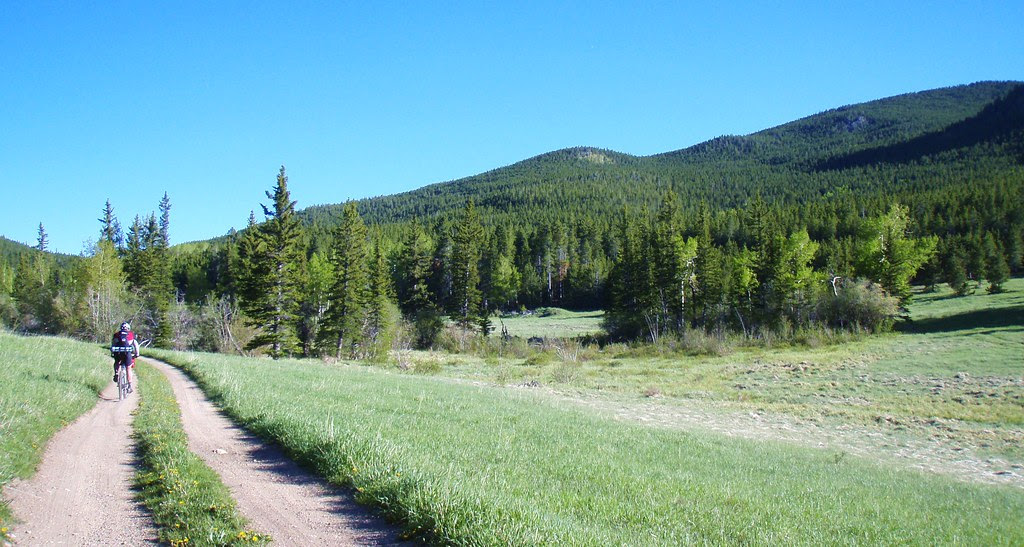 At the end of old flowers, we grunted up the backside of Rist before bombing the 2,700 feet back to town. We got to my door at about 8:30 PM....another long day.

Even though we both wanted to toss our bikes into the woods several times, it was a heck of a trip. The millage does not even come close to reflecting the difficulty of the ride. In the first 6 hours of riding/hiking on Saturday, we covered about 13 miles....ouch! We finished completely spent, but super happy. Good thing we're brothers because most people would of been at eachothers throats about an hour into the hike section.

Even before we got home, we were already plotting out a route for next weekend down on the Colorado Trail...

Lasty, here's a fun fact: Nuun is the shiz for long rides like these beause you can flavor lots of water from a small package, it also covers up the iodine taste in treated water perfectly. More importantly however, we discovered that when ride moral is low, just convince your riding buddy to pop a tablet on his toungue. The faces he'll make are priceless. I promise that the fizzing on his toungue will lighten any mood....Sure wish I would of taken a picture of that...

Suhweet! Ok, now we need a post with a list of all the stuff you took with you on the overnighter.