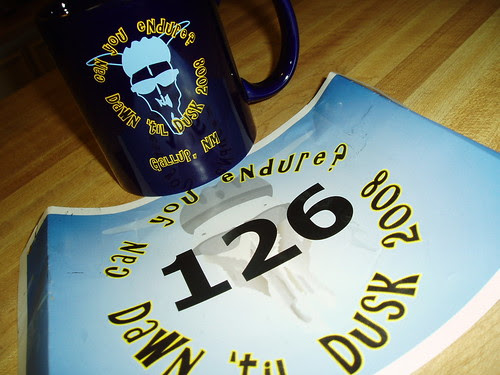 Made it down to Gallup NM on Friday night after driving through 3 snowstorms and Friday rush hour in Albuquerque....good stuff! However all 3 of the radio stations in NM kept me good company! Got to the race area, set up my tent, worked on getting things ready for Saturday, filled bottles, made dinner, and hit the sack early. 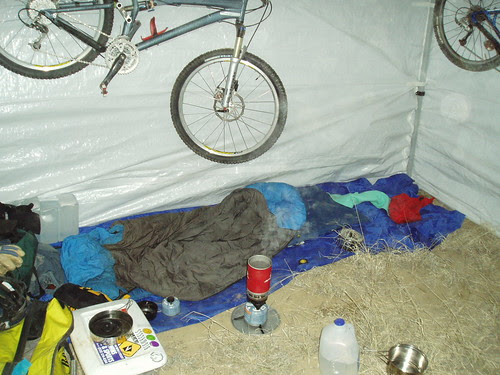 Woke up race morning to a brisk 23 degrees and slowly got out of my sleeping bag. I had forgotten all my coffee at home (dumb) so I whipped up a quick batch of soup to warm myself up as I made a few final preparations. At the race start I was wearing full winter gear and was still quite cold. I knew that as soon as the sun came up things would improve, but shivering at the start line is something I'll never get used to.

At 7 sharp everyone took off for the 5 mile dirt road roll out. Things thinned out quickly and I was easily in the front group trying to dodge flying gravel from others wheels. Most people were riding hard trying to get out front and build up some body heat. About 3 miles in, a few guys ahead of me crashed hard and I narrowly missed them using my catlike reflexes. By the time I got to the singletrack I was warming up a bit, but still had numb hands and feet (I didn't feel my feet until lap 3). Once on the single track I was happy to see I made the right choice by racing my hardtail....super fast and smooth trail! After the first lap I switched bottles, took off a layer of clothing and headed back out. As things warmed up over the next few laps I worked on settling in and keeping steady. I felt great all day and rode strong and steady. The course was 100% singletrack and since I opted not to ride with a hydration pack it made eating and drinking a bit more challenging. The trail was mostly hard and smooth, but on either side, deep sand was just waiting to eat up your wheel. Stay on the trail...or sink in! 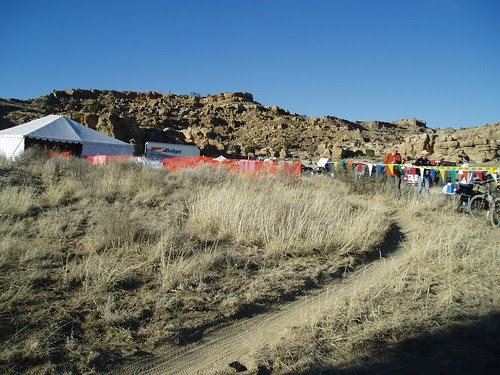 It warmed up slightly as the day wore on, but I still rode the entire race with knee warmers and a base layer. I had set a personal goal for the day of riding at least 9 laps. I also wanted to ride steady and finish strong. I was spot on for easily getting in 9 laps and was actually having a great day and loving the trail. My hydration of around 30 oz per hour and food intake of cliff bars, shot blocks, hammer gel, snickers, and peach O's (my secret nutritional weapon) was perfect and I couldn't of felt better. I also fell in love with my hardtail again as it is super responsive and fast....perfect for this course.

About 2/3 the way through lap 7 I was felt my rear wheel hit a rock hard and thought to myself, "hope that doesn't flat"....yup a few minutes later....flat. No biggie, pulled off and replaced the tube. However, when doing so, I noticed that the impact had also dented the rim slightly and broken a nipple....crap....it was only slightly out of true so I could ride it in without any problems. I pumped up the new tube and was back at it. About 10 min later after passing someone I got a thorn in my rear tire (for some reason I can never have just one mechanical at a time). Dug out the thorn, replaced the tube, and as I began to pump it up my pump crapped out...."what the???". So, I dug out the multi tool, took apart the pump, found that the seals had come out of their respective grooves and that the tiny spring that allows it to pump in both directions had become jammed. So, I fixed the pump, (not an easy task while sitting in deep and super fine sand) and got back on the trail. All told, between both stops I lost around 30 min according to my watch, so once back to the pit I chucked my HT in the tent and grabbed my FS. 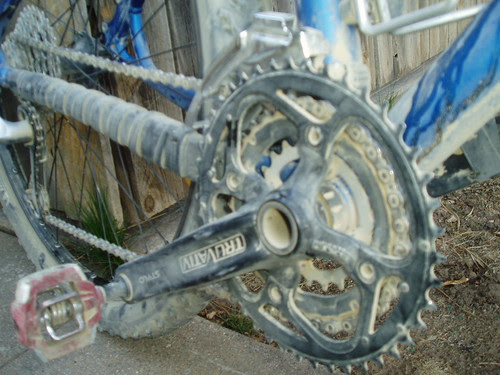 Heading out on lap 8 with my full suspention was a welcome change for my butt, but going from riding a HT for 10 hours to a FS with a wide bar is like going from driving a Ferrari to driving a Semi. My legs still felt real good and I tried to make up some time in hopes of still getting in the desired 9 laps. I came across the line from lap 8 with a time of 10 hrs and 41 min. I could of gotten in another lap, however I was real frustrated and it wouldn't of made any difference in the standings so I did what I usually don't do...turn in and not ride every minute that I can. So I finished with 8 laps (100 miles, 13,600 ft of climbing) in 10:41. All told I am happy with the effort, rode strong and steady all day. Afterall, it's still only mid April and I'm sitting on my most "off" off season since I started racing at 16. My effort was good enough for 4th in the 24 and under category (haven't done a race with age brackets since triathlons back in the day). I Felt strong all the way to the finish and had a smile on my face for most of the day so I'll consider it a success despite my frustrating problems.

In other news, my next "endurance" race will be the Front Range 50 in a month or so. Until then I'll be racing at the local short track series put on by New Belgium Brewery here in town. My training will also be switching focus for the next month or so to shorter high intensity training. I can finish these longer races without too much difficulty anymore so endurance isn't the issue, speed is. I need to focus more on speed and power and try to get another few gears in the legs. XC and other shorter duration racing is something I don't really like, so time to suck it up and focus on my weaknesses.

Great race Andrew. I guess I need to learn how to fix my pump! I would have been begging out there or walking it in!

I've had it happen before so I knew what the problem most likely was. I should use CO2 again, but it's just so ridiculously expensive anymore, so I roll old school with a pump I found along the trail!!