Headed out this morning for a planned ride up to Estes Park and back. When I showed up the other two riders were Amanda and Kerkove....Go Iowa!! Anyway, we rolled out and headed up to the reservoir....literally after about 3 or so miles on the first downhill I felt something stinging the back of the calf and could her some pretty funky sounds from my rear wheel over the wind. Turns out that a spoke and broken and then started whipping around taking off plenty of paint on both the seat and chain stays...not to mention giving me some good lashes behind the knee. So I parted ways after only a few miles and limped back home.

I still wanted to ride so I ran to the shop as soon as I was back and picked up a few replacement spokes to replace the broken one as well as 2 other that were bent up from the broken one whipping around. So, I replaced them, trued the wheel, fixed the torn up computer sensor cables that were also affected. Then I grabbed my Ipod, cranked up some Aussie beats to keep me company and headed back out the door and towards Estes. I crossed paths with the group from earlier at the bottom of the canyon as they were cruising back downhill and back to town. I on the other hand, keep spinnin uphill. The legs were feeling remarkably good and I was climbing with a rather large smile on my face. I got to within about 2 miles of Estes when it started to rain and snow a bit. So, not wanting to get caught in anything I flipped it and headed back downhill. The route is a pretty sweet ride and I'll heading back up there again soon. As I got out of the canyon I turned around to see some pretty substantial and dark clouds following me....good thing I turned around when I did. I made it back to casa de Carney with a hair over 4 hours of saddle time and about 75 miles. That brings this last weeks total saddle time to a smidge over 18 hours. Tomorrow....rest day! 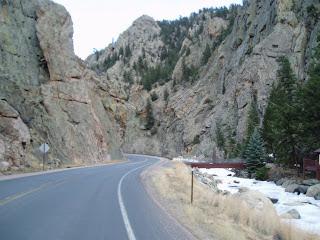 Next time you should take the turn in Drake and head up towards Glen Haven. Some steep climbs that way.