Tuesday at daybreak Dave and I headed out of Fort Collins and drove to Copper to do some skiing. We left at 6 AM in an attempt to arrive as the lifts opened. However the weather had other plans, we got stuck in bumper to bumper traffic in Denver due to snowpacked roads and had to drive no faster than about 40 all the way to the tunnel. After that we were getting pretty excited since we were close, however one more wrench was thrown in the mix when we had to stop and wait for some avalanche blasting about 20 miles from Copper. Sitting still on the interstate is never fun and I've done it plenty of times in CO, but it was slightly better watching a helicopter bomb some slopes and trigger slides close to the road. (I almost got caught in a slide last winter by winter park so I didn't mind waiting for them to make it safer) We got to the resort about 10 and promptly strapped on our boots and headed up the mountain. We figured a good black diamond mogul run would be a nice warm up for the legs so we hit that up, then headed into the trees for some of the best tree skiing I've ever done. Packed powder galore and steep trees make for a great day. We met up with a friend of mine that evening who was there with a big group of her med school friends from Iowa. The way we figured.... skiing with them was a pretty good idea since if we got hurt...well they would know what to do!! We headed out to eat at the Dam Brewery in Frisco that evening and then to a karaoke bar from some good clean fun??

On Wednesday we all headed to Breckenridge to take advantage of $11 lift tickets...yup you heard correctly, some radio station was offering coupons for tickets...all you need to do is spend enough time searching and you can find some crazy deals!! Brek is a big place and didn't impress me too much. The terrain park was pretty nice though with some sweet 35 - 50 ft kickers and some nice rails and such. In the afternoon Dave and I split from the group and lapped up some double black tree runs and skied until our legs were shot. Not much can make the legs burn like 50 degree trees in powder at 11,000 feet. The plan was to leave that night and come back to FC but once again the weather changed our plans. Some crazy blowing snow conditions made us change our minds and crash on the med students couch again. We all hit up the hot tub for a few hours and stayed up way too late hanging out...it's amazing what you can learn about sports injuries with med students. 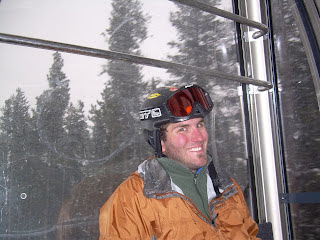 Hangin out in the gondola at Brek
On Thursday morning we scored some lift tickets from some people in the group who were too tired or too injured to ski. We once again skied some black bumps in the morning and then hit up the trees and park in the afternoon. I finally got skiing switch down pretty good as well as some nice iron crosses on the kickers. Dave threw down with some switch 180's and 360's on the 50 ft booters. Once again, the trees were the best I've ever skied and I'm fairly sure I had a grin from ear to ear the entire afternoon. We turned it about 4 and headed in for some margaritas and mexican food at a local place. We also checked out some shops and I saw some tele skis I simply must have soon!! Once again we were planning on leaving that evening but the weather had gotten worse and it was snowing like crazy and we crashed again and hung out with some future doctors. 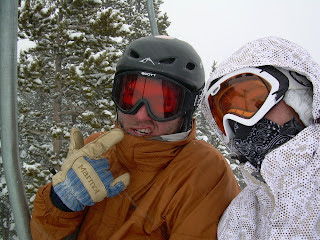 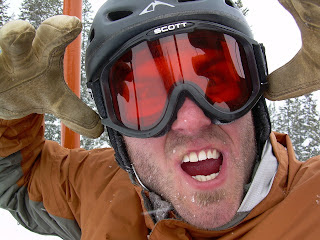 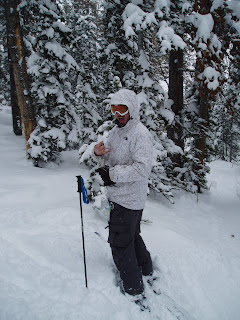 This morning we woke up and discovered that the fresh snow and high winds had created some HUGE wind slabs which lead to some extreme avi danger. Parts of I 70 were closed and we were trapped. We hung out all morning until they had bombed the bad areas and opened the road. We got back to FoCo about 2. Needless to say our 2 day 1 night trip turned into a 3 day 3 night trip filled with unbelievable skiing and meeting tons of cool people that I wish didn't have to head back to Iowa. Dave also headed back to Ames so I'm back at my place working on bikes and looking forward to taking advantage of the warm weather in store for this week!!

Get out and do something!!

Yes! That's the shot we're looking for. The best gift I ever gave! YARRR!