Here are some rather incriminating pictures I ran across this morning. The first one is from the first traithlon I did when I was 16.... the Clear Lake sprint distance tri. I had seen an advertisement for it at Waynes Ski and Cycle and decided to give it a whirl. (I even tried to convince some of my friends to do it as well, but they thought it was a stupid idea??) Racing on my trek 820 mountain bike I think I came in around 5th in my age group. On the way home from the race, I stopped by Waynes and I put a trek 1000 on layaway. A week or two later I had scrounged up the rest of the money and was hooked. I did the Gladbrook tri a few weeks after that and the rest is history.... 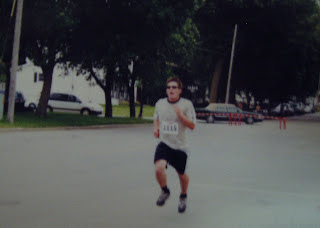 The most running I done prior to this was junior high track and football practice...I think those are my swimming trunks I'm running in?? 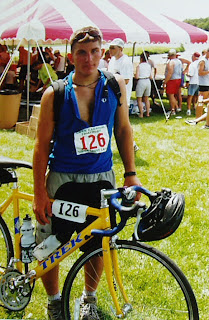 I still have that Trek 100. I've raced it until I was 18 and bought a tri specific bike for my first Ironman. Then it became my trainer bike until put a few upgrades on and rode it across the country in the summer of '06. I just repainted it and hey it's still rollin!!