Here is what I remember of this years 24 hours of Seven Oaks.

I got over to Seven Oaks at about 9:30 and found my rents who had gotten there a bit earlier and set up our tent. My brother, Dave and John (Dave's brother) were racing on a 3 man team, so we all had a pit together. After getting everything else set up and my small private grocery store all organized on my table I relaxed for a while before getting changed for the start at noon. The pre-race meeting was standard procedure, and having raced here the previous 2 years and having lived 20 minutes away for the past 5 years I am pretty familiar with the course, as in I could probably ride the whole thing blindfolded. Anyway, I did a quick warm-up and toed the line. 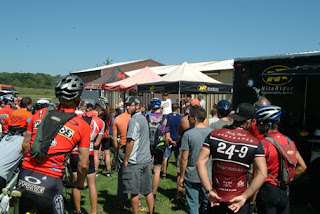 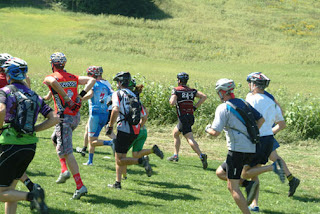 GO!!
After a false start, we were off at noon and I took the run pretty easy. My race plan was to just sit back and cruise for the first half or so of the race and not burn too many matches. I wanted to stay in contention and then turn it up for the second half of the race and see what that did. I knew that my biggest competition would come from Carl and Squirrel. I was about 1/4 the way back when we hit the singletrack, and I worked on settling in. I knew that my lack of training over the last month would come into play as the race went on. I took two weeks completely off after the 24 hours of 9 mile at the end of July and since then have only put in about the millage I was riding weekly prior to that, so I had a base, but that was about it....stupid job search :) Anyway, I settled in and kept my pits super short, mostly not even stopping and refueling on the go through the pits. About 4 laps in I passed Carl who was looking a bit beat. The trail sure does take it's toll on those who are not used to it. It is about 99% singletrack and rarely flat, you are either turning, climbing, or descending, quite a workout.

I kept an eye on the split between myself and Squirrel, and he was holding about a 10-20 minute lead on me. I kept the fluid intake high and kept pounding down the food...mmmm...cliff bars and gell!! I stopped to put on my lights around 7:00 and headed out into the dwindling light. I sure does get dark fast in the woods!! 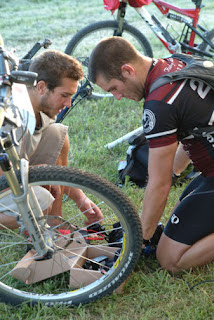 Strap on those lights!! 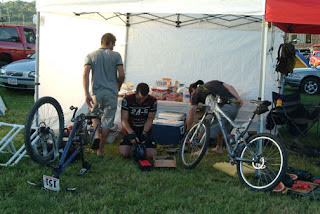 I was feeling great and was actually looking forward to my night laps. My head was completely clear and I was pretty surprised at how good I was feeling. I had to keep myself in check however and not go too hard. I wanted to kick it in later so I had to calm myself down and not push it too hard. At about 11:00 I stopped for some soup to warm myself up and get a change of clothes....mmm...dry shorts!! I didn't know it, but Squirrel had stopped for a rest as well so when I went out on my next lap I was ahead of him. I just kept my easy pace up and kept spinning. A bit later...I'm not quite sure of the time, I noticed I had a slow leak in my front tire. The trail is littered with thorns, and I was running with rim strips but one must of made it's way through. I stopped and pumped it up and planned on changing it in the pits. However a bit later it blew completely. I stopped to change it and when I took my spare tube out of my seat bag and put air in it I noticed that there was a huge gash in it. My multi tool must of been rubbing against it in my seat bag for too long....so I had to patch my spare tube before putting it in. The hoards of bugs didn't make it any easier either. As I was working, Squirrel rode up, said a few words and rode on. CRAP.... I finished the lap, grabbed more tubes and headed out again. I had two more flats that next lap....WHAT THE HELL??? I had a blowout on my rear tire where a gigantic thorn went right through the 1 inch overlap in my rim strip...what are the chances of that?? I changed them out and was getting pretty frustrated.

My legs were still feeling amazing, but my stupid tires just didn't want to hold any air. My plan was to switch batteries at the end of that lap and being that I had to patch 2 tires and one the lap before, my headlight went out about 2/3 the way in and I had to finish the lap with only a bar light.....not easy or fun on that trail because of the twisting nature of the trail...good thing I know the trail so well, because there are times when you just have to turn into the dark and hope the trail is there when your bar light comes around. I got to the pits with a soft tire...again and no lights. I was ticked to say the least. I swapped both tubes as well as my front tire, and got new batteries. I headed out on the next lap and got to the top of the first climb and started the downhill.....another flat????? I was about ready to throw my bike into the woods and just run the rest of the race by that point. So I turned around a headed back to the pits. On my way back I ran into Squirrel and told him what was up. I had spent so much time fixing flats that he had managed to put a lap on me....It was about 5:30 by that point and I knew I had pretty much no chance of catching him unless his bike broke in half or something. So I knew my chances were pretty slim. DAMN

My legs wanted to go go go still but I just kept having stupid flats. So I got back to the pits, fixed yet another flat and headed out. I was pretty pissed the whole lap and when I finished I checked the board and saw that I had about a 6 hour lead on 3rd place. Well, I did one more lap and knew that I couldn't catch Squirrel and that the 3rd place guy couldn't catch me so I sat down in a pretty funky mood. It was really frustrating, because amazingly my legs and head were spot on and wanted to rock and roll, but my equipment had other ideas. I called it quits and ate some warm food. Squirrel kept riding thinking that I was still out, however I had actually fallen asleep in my pit and had decided that there was no way I could come back and called it. So I finished with 15 laps and had finished at about 6:30 am...I think anyway. Squirrel kept it up and put in 18 laps. I cleaned up and tried to get a smile back on my face.

I'm not saying that I would of beat Squirrel, but it would of been a hell of a race. I felt great and wanted to ride my ass off, but it just didn't happen. Congrats to Squirrel for a hell of a ride...nice work man...especially on a rigid!!

So I held on to 2nd and took home a $350 check. I also happened to win a new Night Rider light system and a few pairs of sunglasses....so it wasn't a complete loss. But I would of rather had the win....regardless of the cash prize. 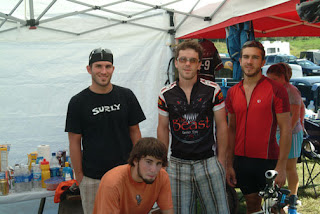 Dave, John, and Stephen put in 22 laps to win the 3 man team division by I think 4 laps...nice work!! Thanks to everyone who helped at the race, the trail was in great shape and the whole event was run great!! Thanks for all your hard work putting it together!!

The whole deal was pretty frustrating, but hey...it happens. I wonder if they sell solid rubber bike tires??? Once again, nice work Squirrel.....wish I was up there with you, but oh well. I hope you spend some of your winnings on some Fat Tire on the 8th!! Peace

Andrew you rocked it brutha....mechanicals can definitely get into ones mind and make you say fuck it....I've done that shit more then a few times over the years. Why don't you come down on the 8th and I'll buy you plenty of Fat Tires....there is no doubt in my mind that if you hadn't had all those problems this would have been the best damn race this venue has ever had. Keep turning those pedals and spreading the love:)

Nice work Andrew, one hell of a ride.

Congrats on a good race, and the spoils, and too bad about the flats. Like squirrel said, it could have been one hell of a race. Have I ever told you about the homemade goo that I inject in my tubes? I don't get flats anymore. I still pick up thorns, but I (mostly) don't get flats.

Of course, you rode more laps at Boone in that day than I will ride this whole season!