Last night Dave and I took off from our house with my trailer in tow. We stoped at Jubil's casa to pick him up as he hooked his lights up, then off to Peterson. We got up there a bit late and after a bit of looking ran into Paul, Cory, and Alex. It's been a while since I've been on singletrack at night, and I had forgot how enjoyable it it. 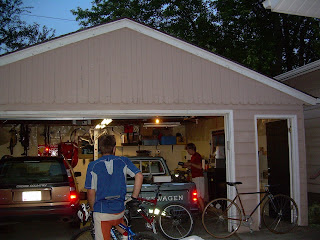 We headed up to McFarland and I had to drag the BOB full of ice and brews down the trails. It sure does make some sweet noises rolling over roots and everything. It also makes the climbs a bit more fun with all that sloshing around behind you. We rode up through the prairie and up to Paul's casa. We hung in his garage AKA his bike warehouse, drank some brews, and shot the shit. Thanks again Paul! After awhile we flipped it and headed back twards town. We chose a gravel route this time and also tried a "mid-air refueling" from the trailer, although Cory was the only one who could make the reach all the way down into the cooler and come up successful. The pace back into town was casual and just as we got to town, Jubil got up close and personal with the pavement when he slid out on a corner. Other than that, we cruised home.....good times were had by all!!!

We'll hafta do it again sometime!!

sounds like you mates had a good time....maybe someday I'll make it up.