So, when I woke up on Sunday morning for the drive up North to Waverly, it was pouring rain in and I knew it was gunna be an interesting race. However when Stephen and I got there it hadn't started to rain yet, but that changed about 45 min before the race started. I got a warm-up in wearing full rain gear and checked out the singletrack which was like riding on warm peanut butter before the race had even started. 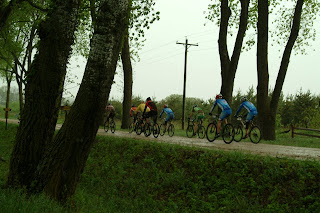 At noon Carl said the magic word and we all headed off into the muck. The first part of the race was on a gravel road which shot up into the first downhill singletrack. On the gravel road I swallowed about a dump truck load of gravel that was being thrown up by people’s wheels. The singletrack was interesting to ride, everyone slid down the first downhill section and it didn't get much better from there on in. I was in 4th place sitting behind Kyle until he slid out on a rough patch and I managed to sneak by and eventually move up into 2nd place behind by the time we got to the rock garden section. I was feeling great and was riding at a comfortable pace all through the pine section and then my bike got pissed at me for getting it all dirty because my brakes stopped working completely. I know, I know, everyone had problems with their brakes, but I was running rim brakes and now I know why disks were invented. At the end of the race I could squeeze my brakes as much as I could and spin both my wheels in the air and they would just keep spinning....and spinning. So needless to say the next lap and a quarter were pretty darn interesting. I couldn't ride down any hill because I had no way to manage my speed. I had to ditch several times just to stop; I was bouncing off trees and somehow still had a huge smile on my face. 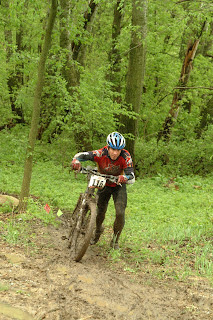 Stephen rode to a 2nd overall in the sport class!!

The second lap I knew the trail a bit better so I knew when I needed to get off and run a little better. Since I had to now run the downhills and many of the uphills because they were torn to shreds I basically ran a good 1/3 of the lap. There were many reasons why I quit doing triathlons and running was one of them....because it sucks!! I ended up holding on to 4th place until one of the leaders flatted and bumped me up to 3rd. My legs felt good the whole race even after last weekends torture and I feel I could of done a little bit better if my brakes worked a bit better, but I had a great time regardless and rode most of the time with a huge smile plastered on my mud covered face. 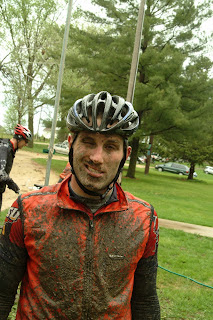 Smile for the camera!!

Big thanks to Carl and Kerkove for a great race.....and I don't care what anyone says...the run up the sand hill was awesome!!!....if you complain about that part....suck it up, this is mountain biking and playing in the dirt is what it's all about!! 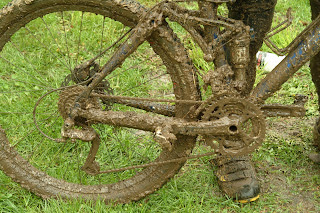 Oh yeah...I graduated on Saturday....It only took 5 years too!!
Degree in Ag & Biosystems Engineering with a minor in Forestry....Check 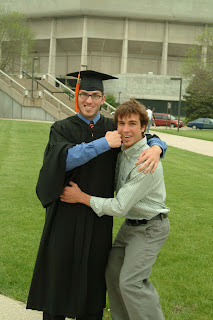 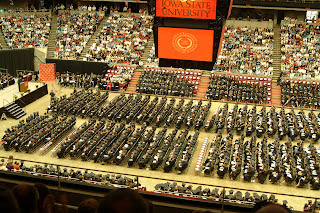 Congrats Andrew both on the race and the graduation. For what its worth, several guys with disc brakes also finished with no brakes, including me.

Yeah, sounds like everyone had brake problems, My brothers pads were completely gone at the end and were down to bare metal.

Congrats to you on the finish as well. Hopefully you'll get a chance to get that salsa up to speed soon in a race. I bet it'll just hum with those big hoops!!

Congrats on graduating Andrew and to a great race also. Nice job!!