My job is prolly sweeter than yours

So, the week of freedom has come to an abrupt end and classes are back with a vengeance. The trip went great but I want to start by saying that it got off to a bad start. About and hour and an half before I left I realized that someone had stolen my singlespeed off of my porch. So if anyone sees a GT singlespeed that is completely plastered in stickers cruising around , you have permission to spear tackle, harpoon, or otherwise mame whoever is on it. I only hope that whoever took it is dumb enough to ride it on campus, because it is prolly about the most recognizable bike around and I have a small army looking for it. The bike itself isn't worth over $500, but I love it none the less and want it back quite bad.

Ok, on to the good stuff. The trip went well, we got into late Saturday night after some holdups in due to a jackknifed semi blocking the Eisenhower tunnel. On Sunday we rode Slickrock as a group. I have ridden the entire trail with my brother before in about 1:15, but we had some people who were literally new to riding and it ended up taking us about 5 hours. It was still a fun ride regardless. The point of guiding trips like these is to inroduce people to riding and places, not kill them. So, it offers a different kind of satisfaction when people tell you how much they now enjoy riding, or how they may look at things in a different way. Some days I can't believe I get paid for taking people places and doing the things I love... 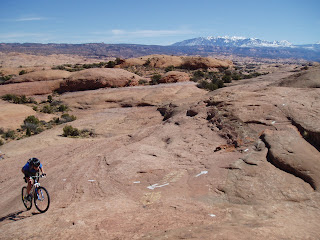 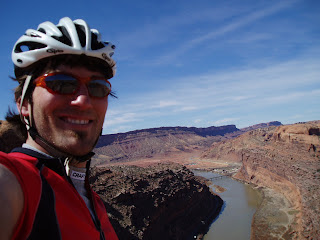 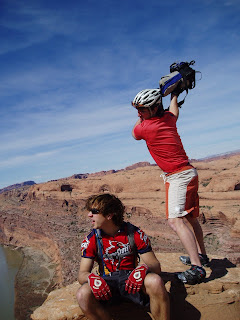 On Monday we headed into Canyonlands with 80 gallons of water and enough food to feed a small army. On outdoor rec trips we budget $8 per person per day for food so we can eat like kings and I took the opportunity to plan some pretty sweet meals such as pizza in dutch ovens, stir fry, sourdough pancakes, pineapple upside down cakes, cobblers, deep fat fried doughnuts, fajitas, and a taco/chili dish. I figured that since I wasn't paying for groceries, why not have some fun. It was also my brothers 19th birthday while we were on the trail so I supprised him with a pineapple and cherry upsidedown cake with some candles. The first day we dropped down from in the Sky to the white rim (about 1500 ft) and had a total mileage of about 16. The trail was like an easier version of the 24 hour race course. Fast enough for beginners, but still fun to play around on.

Great view from Island in the Sky district 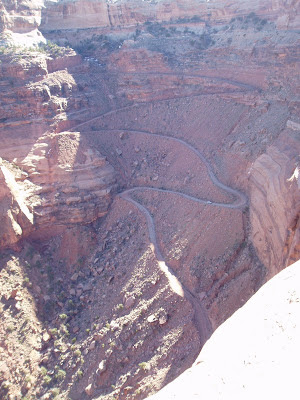 Some of the swithback on the way down, you can see a
4x4 on the way up if you look carefully

View from our camp on the first night

Day two was our longest calling for 26 miles. All the leaders were real impressed at how everyone rode the whole trip, even on our longest day, people were cranking out a pretty good pace. Our last few days we had tons of time to relax, get sunburn, and do some side hikes. We had tons of little injuries throughout the trip and I was constantly on the move with the first aid kit riding between groups and patching people up. Nothing major, which was great, but lots of cuts and bruises for sure.

Some views from the trail again 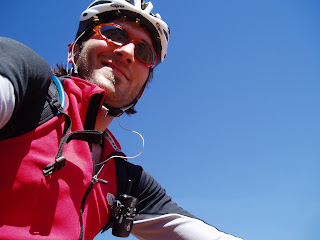 Cruising, just waiting for my radio to tell me
someone went down and needs the 1st aid kit 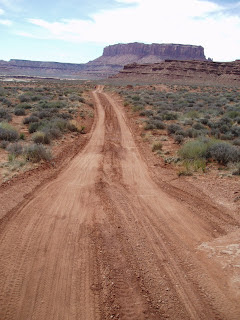 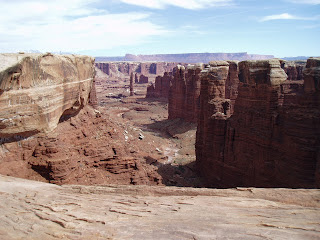 That spire in the middle of the picture is called the todem pole....
It's on my list of things I want to climb in Utah for sure 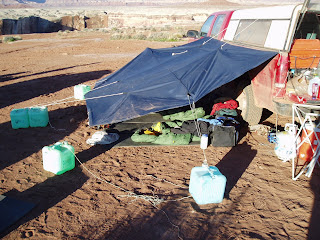 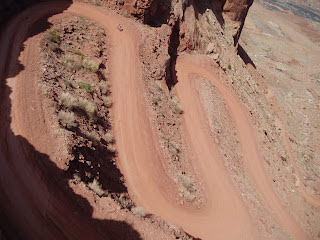 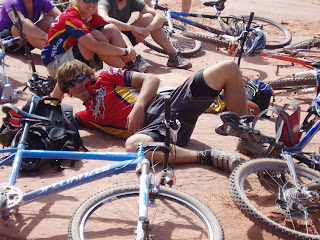 Yeah, I don't know how I'm related to him sometimes

We got back Saturday afternoon and now I have lots of pots and stoves to clean, bikes to fix, and work to do. It took me three washings to get any suds in my shampoo! I'd almost like to leave it at the perfect nastiness that the desert creates, but I guess I'd start to smell too much like a hippie. For now, I'd best get back to work.....Yet another sweet trip to Moab...more to come...

Makes me feel like a kid again just reading it. Never been to Moab (yet), but I have several college skiing trip that I'm still not at liberty to talk about.

Yeah, I'm kinda bummed about graduating. I can't take a trip every other month like I have been doing. But some income to fix bikes when they break would be sweet.