I saw the trainer for 24 Solo a few months ago and have been anxiously waiting for its release this spring. They have added more footage to the online trailer making it even sweeter....Check it out for a little winter motivation!!! 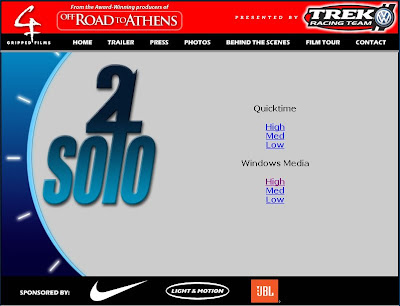 Clicky Clicky to see it!!
In other news it has been just over 3 months since Floyd Landis had his hip replacement surgery. According to his site, as of now the leg he received surgery on is more powerful than his other leg!! He is riding pain free and I can’t wait to see what he is capable of with two good legs and no hip pain.
It was going to be a great duel at this years Leadville 100 between Floyd and Lance, but Lance had to go and back out. Hmmm...he said is was due to scheduling difficulties, but I think he is afraid of getting whipped by a certain ex-pro mountain biker named Floyd...it would of been a showdown that's for sure. Anyway, I'm getting more and more pissed at the WADA and Dick Pound and how they are handling the doping case. Apparently the WADA and the UCI have said that before even a single day of hearings has been held or any evidence formally presented, they will appeal a decision if it is in Floyd’s favor regardless, apparently, of how compelling or overwhelming the evidence is in Floyd’s favor. Why even have the case in the first place then.... I could go on, but I'm afraid I would develop carpel tunnel before I've said everything.....so, off to class....Peace Out.