Growing up, my grandpa had a sign sitting on a bookshelf that always caught my eye. The wording was straightforward and to the point: "It is better to remain silent and be thought a fool than to speak up and remove all doubt".  It's a rule of thumb I like to obey on here. If I wouldn't want to read it, don't write it. That said, here's a quick recap of the Breck 100 this past weekend. 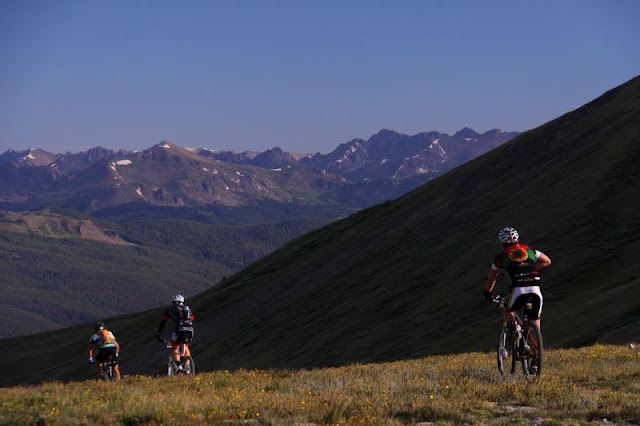 Starting the decent off of Wheeler Pass on loop 1.
Photo by Chris.
Getting up at 4:30 AM is never fun especially when you've had a crappy night of sleep in a hotel room that never got below 90 degrees. Regardless, I was looking forward to racing after a rough week of scrapping a bike together at the last minute due to a broken frame 2 weeks ago.  The first climb up to Wheeler Pass went by slower than I wanted and neither my legs or stomach really wanted to wake up which made the Peaks trail segment a tad rough. I rolled in after lap one a few minutes slower than last year with a percieved effort that was a bit higher. A bottle swap later, I climbed out of Carter Park and up to Sally Barber and Little French. I felt the best I did the whole race on lap 2 and had a good lap, not as fast as I wanted, but it was steady. My favorite climb of the race is the singletrack up to Westridge, it's 30 min of perfect climbing that always makes me want to rip the cranks off. It's hard not to have fun on the 2nd lap since those trails are so perfect. Railing down Westridge is always a highlight of the race and since I've been spending so much time in the area this summer I know that section almost too well which means the brakes are just for show and I can really rally. The third lap went by rather uneventfully. I was able to pull a handful of spots back on both of the climbs up over Boreas and by pinning it on Gold Dust, but my lap time was still a few minutes slower than last year. I rolled across the line in 10:06 which was quite a bit off my goal time, but at the end of the day, I rode 100 miles of some of the best trails around, pushed myself, pushed my bike, and had a good time.  Next up I'm heading East to the Wilderness 101 in Pennsylvania.

You did a nice job yourself. Yeah,the Breck 100 is hard. I was talking to a couple guys about how just the 68 is harder and better (by far) than leadville100. I think that we were sitting across the way from you guys in the pit area. I wasn't sure - I think I saw you walking around. Anyhow, I'll see you out there sometime.

Sweet post...sounds like a lot of work. How many people competed in this race?

Slower times? Me too by 2 minutes, but remember that more "slower" singletrack was added to replace fast pavement- before, on and after Gold Run. Overall this year was a harder race to beat past times. Brad