Alright, so here's the story. I've raced in Moab twice before and twice it has broken me. In 2006, the rain destroyed both my spirits as well as my bike. Last year I spent the night before the race holding my tent to the ground in 50 mph wind while swallowing copious amounts of dust which later lead to me never really getting going and then cracking (hard) after the sun set. This year, I wanted some revenge and was mentally prepared for rain, snow, dust, hurricanes, pumas, locusts, or whatever Ma nature wanted to throw my way. My personal goal was 15 laps and I knew if I stayed calm and steady it was possible. Here's how it all went down.

Once again, based on sitting up all night last year, I drove to Moab on Thursday so I had lots of time to chill, set up, and even sprung for a hotel instead of the usual Carney sleep wherever method. I knew I had good fitness going in and was in a good place mentally to really suffer. Is it bad when in the weeks before an event, I start to think about how much it will hurt, how much I'll want to stop, and I start to smile and get all giddy? On Friday my pit crew showed up, AKA my parents and brother. I did a easy spin on Friday with Stephen and the Ergon crew and things felt great, I was as ready as I was going to be. Race morning I was super relaxed and had everything dialed. The gun (potato cannon actually) went off at noon and the game was on. My plan for the first lap was to go super easy (obviously), so I had a good time watching team riders who all thought it was the Olympics and the finish line was just over the next rise. I saw lots of crashing, heard lots of heavy breathing, and had a nice chill lap. Well, it was chill until about half way through when I heard a spoke snap, and then another. Turns out a rear spoke snapped in half (I must need to lay off the cookies more) and a front spoke popped as well. So I nursed the rest of the lap, and jumped on the Yeti for the 2nd lap while Stephen fixed the Siren. 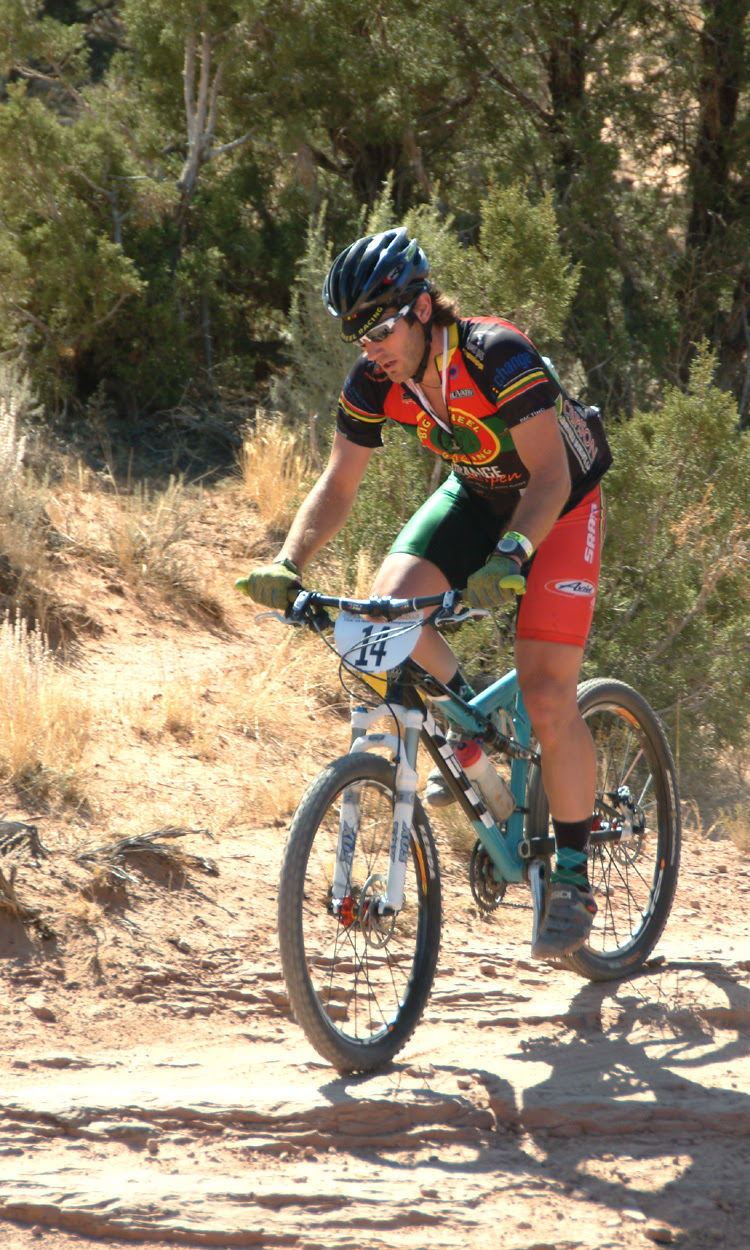 I haven't been on either a FS or a 26 since I built the Siren in July and all I'll say about riding the Yeti for a lap is that I could not wait to get back on 29's. It hurt. My 2nd lap was much slower than even my first even though I felt like I was working much harder. However on my 3rd lap I was back aboard the big hoops and stayed there till the finish. 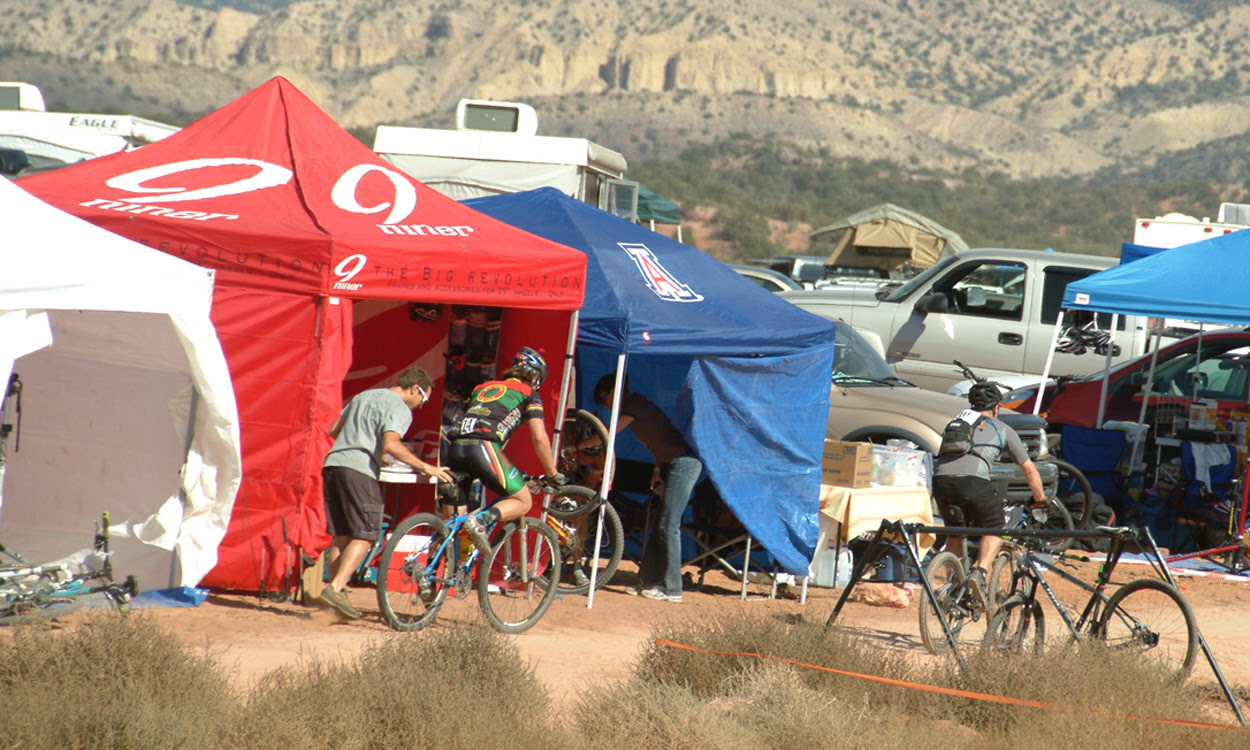 However by this point it was downright hot out. Ok, so maybe not for the desert rats, but it's been cold all summer in the fort and the heat was killing me. For example, on Friday I was setting up while wearing shorts and a t-shirt and has a pretty good sweat goin' on, then I started talking to LW who was wearing a down jacket.....what the? Seriously, a down jacket? I guess that "hot" in St. George is only when it's over 130 or something. So in the afternoon heat I was burning up and spent the next few hours until sunset just trying not to hurl or cramp. Major conservation mode. However I knew to just chill and that as soon as the sun set, I would turn the screws a bit. Afterall, there was still 20 hours left to race. 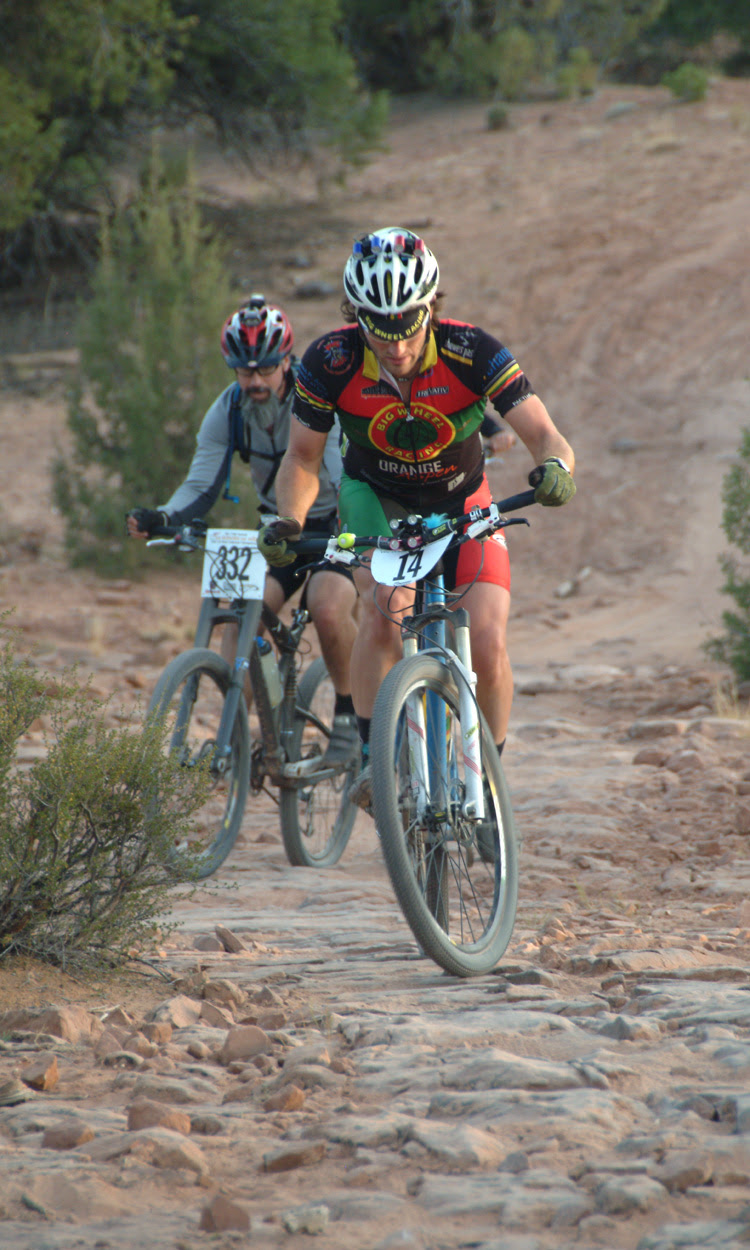 Sure enough, the sun set and I felt much better. I kept things steady all night and had fairly quick pits. I was having a real hard time eating on course so I would stop to slam some food in the pits but only stopped for more than a few minutes if I needed a battery change. Speaking of lights, I think I had the sun strapped to my helmet. I ended up running a double set of Ay-Ups which put me right at 1300 lumens and for the first time in a 24 I really felt like I had enough light. It was great, I couldn't out run it, the sand couldn't suck it up, and I could see all the crazy lines in the rock jumbles. Blinding everyone else was also a plus. For once I was "that guy" who when he rolls up behind you at night his lights are so bright it annoys you because your lights are blown out. It was great! 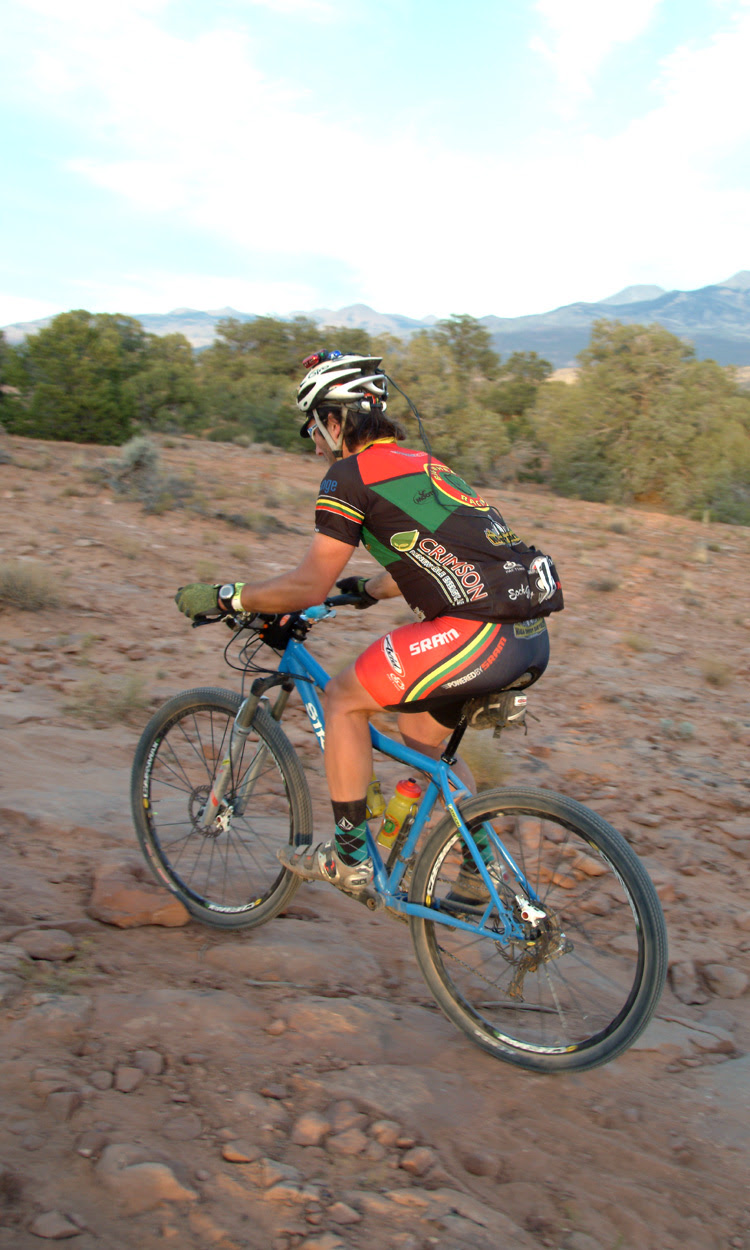 The night got cold but I kept the demons at bay and never really rode super well, but stayed steady. My brother and dad did an amazing job running the pit and making stops smooth. I had some pasta sometime in the wee hours of the morning and was lovin' the fruit chunks. New to me, but I never know what I'll crave when I shop for these events, my taste buds could go in any direction. I had one stop of 15 or so minutes to eat, change bats, put on more warmers etc, but other that that I don't think I stoped for more than a few minutes at a time the whole night. At some point around 4am, JK was in my tent and caught my foggy brain on video, good blackmail material I guess. 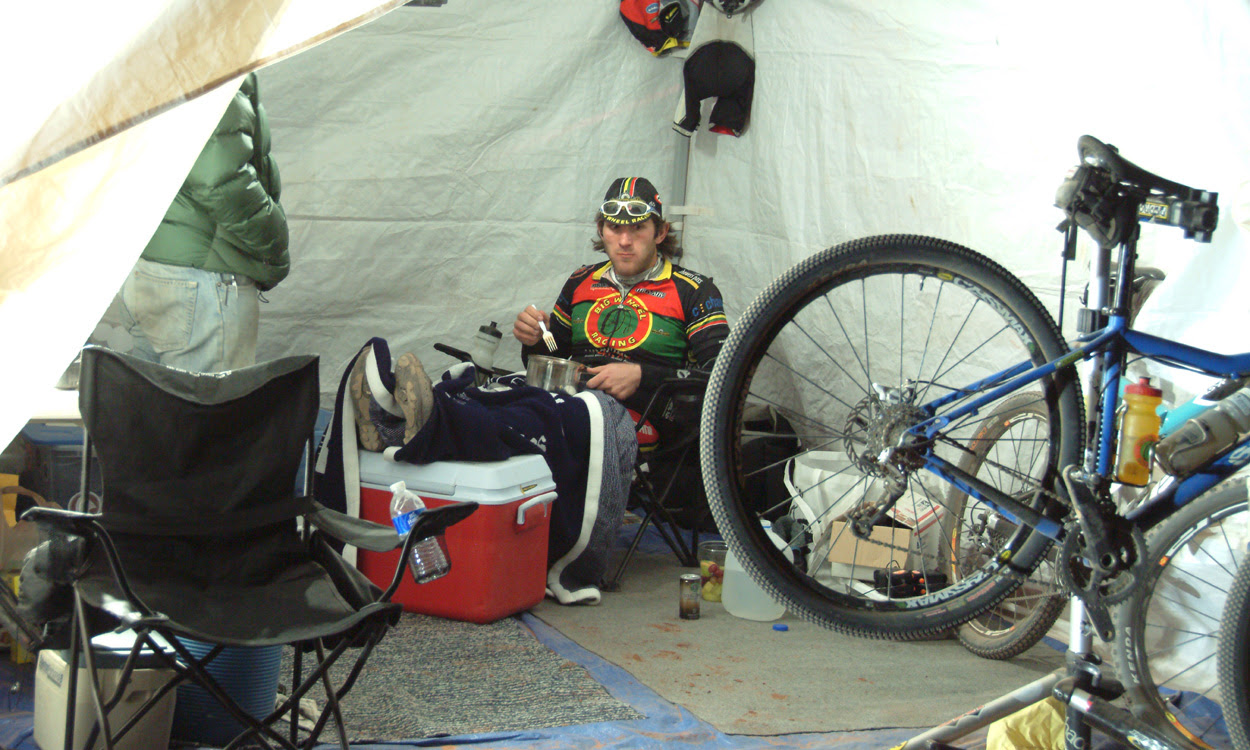 Throughout the night I kept moving up in the placings and by mid morning I heard I was in 7th or so. I turned the screws all the way the last few laps and gave it what I had left ending with 14 laps at 12:14 or so, just short of being able to go out for my goal of 15 laps. Regardless it was good enough for 6th place in the Solo National Chamionships Class. Not too shabby and a satisfying way to end the year. 3rd time at Moab must be the charm because I finally felt satisfied with the effort. I'll still be back tho. 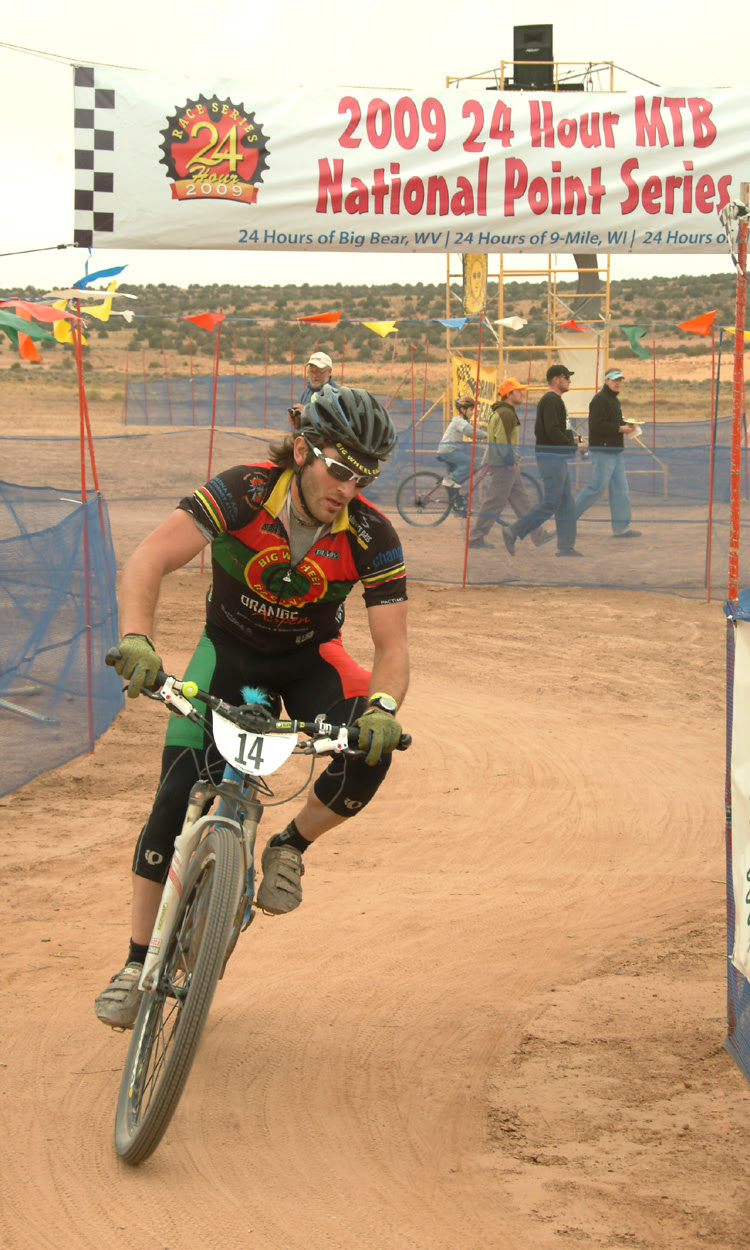 Off season is in full swing....pass the cake.

Great job man. I'm glad to see you got the bike fixed.

I'm wishing I had hopped back on the big wheels later. It would have saved me knee, and I think my lap times were faster.

You've really been rocking it this year!

Awesome! When you going pro?

Awesome work Carnage! You need to get a set of "race only" wheels, if you can get a race-only bike. Damn, it seems heavy used stuff always wants to break in races....

Good deal on the Ayups. You can never, ever have too much light in a 24-hour race.

Way to rock the course!