Alright, so around a month ago JK hooked me up with a Ergon BD2 pack, and since then I've ridden roughly 50-ish hours with it. Overall, I'm in love with the thing and sometimes even sleep with it on my back...ok not really, but it is THAT sweet. I'm sure with a little Google work, a person could find a much more detailed and eloquent review elsewhere on the interweb, but here's my 2 pennies worth: 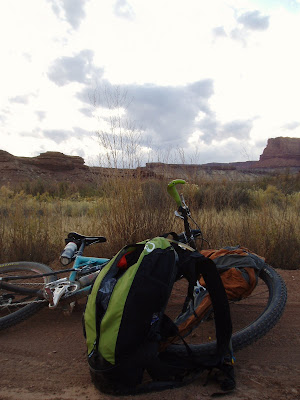 In your hands for the first time the pack it is noticeably heavier (empty weight) than other packs of similar volume (~ 1000 cubic in.), however before you weight freaks dismiss it, take a chance and throw it on your back. Only then can you see why the pack is so rockin'! Besides, what good is a pack that's feather light if it is uncomfortable. When you put it on, don't be embarrassed if you involuntarily blurt out: "Oooooo, me likey", while jumping up and down, I did! As most people are aware, the departure from normal pack design is in the ball-link harness system thinger, which is technically named the FLink System (here's the technical bits). The ball joint allows the shoulder harness to freely rotate and move with the movement of your body, and when I say it moves with you, I mean it MOOOOVES with you. It's quite a new sensation compared to the traditional backpack feel because your shoulders can rotate and the hip belt doesn't lift or shift around.... at all! The pack noticeably distributes more weight to your hips than other packs I've used and it take a bit to become accustomed to the additional weight on your hips, but in the long haul, less weight on the shoulders = good.

At first glance, the BD2 might not appear to have much in terms of internal or external gear organization, but that's just pure crazy talk. I won't list all the pockets here, but take my word that they are everywhere, there's even a super secret ninja pocket inside another pocket! Gear organization within the pack certainly hasn't been an issue for me and I can get quite picky about organizing my pack.

I don't own a scale other than the one in my bathroom and even that's way off, but I'd guesstimate that I've ridden with up to roughly 15-18 lbs in the pack. It seems that the more weight is in the pack, the better it feels, weird I know, but that's just how the BD2 likes to roll. Even when cranking out of the saddle or being thrown around on a rough decent the pack stays put and moves with your body instead of hindering it.

Hidden all over the pack are little details like a non-slip coating on the hip belt, a integrated rain cover, pockets and organizers up the wazoo, a rescue whistle, and more details that I'm sure I haven't even found yet. Overall, the attention to detail and quality is absolutely top notch. I have a habit of trashing and destroying any piece of gear I own, but I'm certain this pack will stand up to the abuse and come out swinging.

Lastly, there are a few small things that I've either noticed or heard others complain about. First, is setting the pack up correctly. I stand at a towering 5'9" and have the pack set up in the middle hole. I prefer things lower on my hips so I'm actually considering trying the "tallest" setting just to see how it feels, but that's just personal preference. One thing I had problems with initially was that since the pack is separated from your back it has a tendency to "drift" to one side while descending. Mine always fell to the left for some reason, but it's easily remedied by tightening up the hip belt a bit.....another reason I like the hip belt to be low. Also, since the pack had a fairly robust hip belt system, your jersey pockets are not really accessible, although the large pocket on the "front" of the pack more than makes up for any loss of jersey space. Lastly, it doesn't come with a hydration bladder, but really, who cares? Use whatever bladder works for you. Ergon does have bladders available in '09 with longer hoses I believe for those interested.

Ok, so there ya go, my impressions of the Ergon BD2. In summary I'll just say this: Anybody want to buy a hydration pack? I'm selling all my old ones! 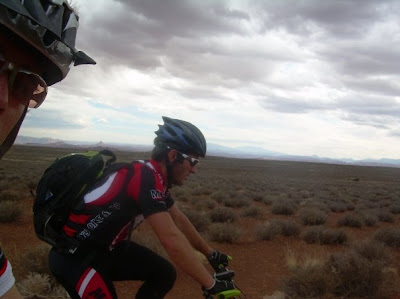 Hey there, I can see in the background of your BD2 picture, you have a water bottle mount on your seatpost. Is this a special mount, or just a regular bottle cage designed for bikes without a mount?

It's actually just a regular cage that I mounted using some random PVC pipe bits and zip strips. I used the PCV bits as spacers to keep the cage away from the post so that it could bridge over the post collar and sit lower allowing me to use a larger bottle and still have room for a seat pack. I know you can buy special mounts, but zip strips work so darn well!

I love mine and for the first ever time I put it on my back was at the onset of the Kokopelli ride. Some problems came up on that ride but I eventually figured out how to dial the thing in. Yes I do know there are instructions but I am a firm believer in intuitiveness and this pack was intuitive enough for me to figure out.....even in food and water deprivation mode.

Instructions? What are those?

Very happy BD2 owner here as well- nice write up! The cover in the bottom is a handy feature as well to keep stuff a bit more dry... Debating on whether or not to use it or the bike mounted stuff for TI this year...