Saturday night at 10:00, myself and about 50+ other crazies started this years Vapor Trail 125. Within the first hour, I knew my legs were still not all there after last weekend. I kept spinning along and before I knew it I was at the first aid station. I took some food and headed out. I felt better for the next few hours as I kept climbing higher and higher in the dark. It's pretty crazy starting a race at 10 PM....kinda messes with your head! I got pretty cold during the wee hours of the morning but I stayed moderately warm by running every once in awhile and because there were PLENTY of hike-a-bike sections things were not too bad....if ya don't mind some numb feet and hands of course.

I was at the top of Tomichi pass just before sunrise and was privileged to some pretty amazing views. Sunrise at close to 13,000 ft while finishing up a several hour hike-a-bike is better than any morning coffee!! After the pass I put on a jacket and descended for, I'm guessing, about 90 minutes. It was actually the coldest part of the ride for me, the sun wasn't on me yet and for the first time since starting my body could relax and it quickly stopped producing very much body heat. Luckly at the bottom Mr. Dave Nice was cooking up some tasty breakfast food! (I had been smelling phantom sausages for miles!...which is strange since I don't eat meat!) I only stopped long enough to eat some food and fill up some bottles.

The next section was the climb up to Monarch pass. This is where my already slow and steady pace slowed to a crawl. I cracked hard about 3/4 the way up the climb. I had nothing. It was around the 11 hour mark....figures after last weekends 24. I stopped for about 30 min at the aid station at the top of Monarch pass, ate some food, (Dave was working there so I made him bring me food! Good roommate eh?) and tried to recover a bit.

The next 8 hours are all blurred together into one big gigantic ball of hurt. My legs kept feeling worse and worse and I had to walk more and more of the rocky climbs. Mentally I was in a very very bad place. I just wasn't prepared for another 18-20 hour race after last week. I'm super stubborn when it comes to finishing races and have proudly never not finished a race I've started which is a big point of pride for me. I kept telling myself that if I finished with a smile on my face it would be a successful ride. So i kept chugging along. My head and stomach kept going downhill however. In the last 6 hours I think I only could eat about 700 calories....not good. I was in super rough shape before finally getting to the final downhill pavement. I also had 2 flats in the last few hours as well as slamming my left shoulder into a boulder, loosing my co2, not being able to see out of my left eye, and starting to have really weird mental conversations with myself until I would realize that I was talking to myself and snap out of it. (Ever had an argument with yourself as 2 people? One who was pedaling and one who was shifting....it's an interesting monologue!!) At last, I arrived at the final section and cruised into town with another racer who I'd been back and forth with all day. He was on a salsa and did the CTR this year (Dan I believe, but I was thinking like a 3rd grader at the time) Anyway, talking to another person in the closing miles put a grin back on my face so I did indeed finish with a smile....mission accomplished.

At some point I'll be back for some redemption on this route. If that's at another installment of the VT or on my own, I don't know. It's the most epic single day ride I've ever done and I'd like to see what I can do if I started fresh and hadn't done a solo 24 the week prior. HUGE thanks to Tom and everyone at Absolute Bikes for making this event possible. One of the best events I've ever participated in!!!

Alright, enough rambling, I can't possible describe this event in words or even pictures, and those who rode this weekend know what I mean. However I did take some photos and here they are: 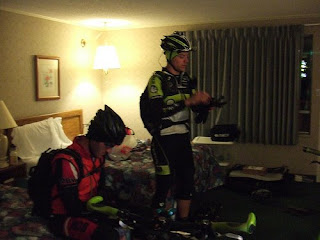 JK and I gearing up before the start 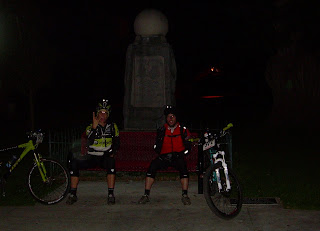 We're ready to rock....where is everyone else?? 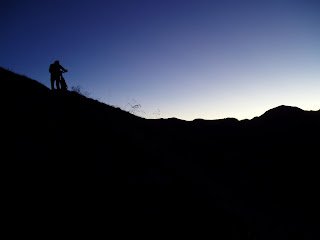 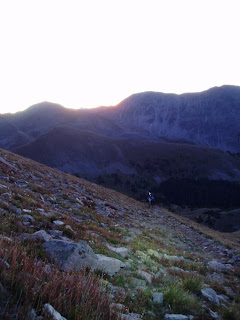 Another dawn shot.
It was amazing in person...photos just don't convey the magnitude and scale very well 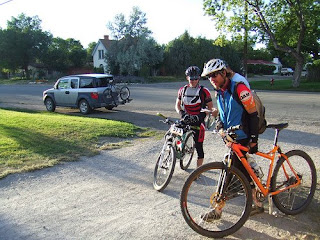 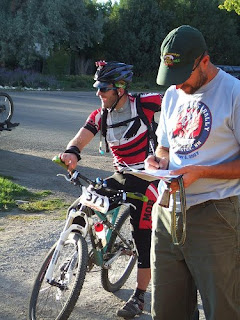 VT evil genius Tom checking me in and calling off the search dogs :)

In other news but still related to my slow death by lactic acid, I'm headed to Snowmass this weekend to race a 12 hour to finish off the RMUE series. Sounds like I'll be seeing alot of friendly faces there so I'm excited! This week = sleep!

Way to finish it out super tough. You're as tough as nails... and to hear you say that's the most epic thing you've done. SHEESH! I have heard about you. See you at Snowmass. Hop on the hurt train!

I told ya it was one of the coolest things you can do on your bike. ;-)