Dave and I headed to Snowmass Saturday and went out for an easy lap on the course during the afternoon so I knew what to expect. Then after dinner we took the "classy" route for the night and slept in the always spacious neon. 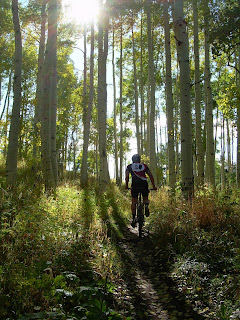 The course consisted of a 1500 ft climb followed by some rough and technical bits before a super rough downhill back to the pits for a lap total of 7 miles. 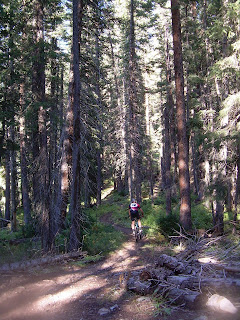 More from the pre-ride
Sunday morning, I had breakfast in bed before getting ready for the day. (By breakfast in bed, I mean I fired up the camp stove without getting out of my sleeping bag :)) For the race, Dave and I were sharing pit space with Matt and Jeni - Thanks again guys! - so we got things organized and I warmed up. 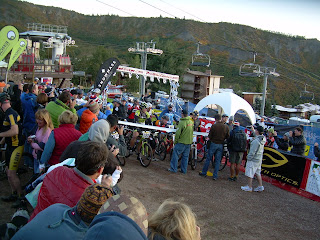 Starting line - Don't swerve too far to the left at the start Jeff :)

I lined up for the start a few rows back since I usually take the first few hours easy and since a certain Tour De France champ was there, I figured the start might be fairly crazy with people wanting to sprint and say "hey I rode with lance for 3 feet"! The first few laps I just worked on settling in and getting things rolling. In the pits I would only stop to take off a base layer and add some magic chamois butter... racing 54 hours in 15 days can be a pain in the rear! ;). Other than that, Dave kept me rolling with on the fly pits. For quite a few laps Matt and I were back and forth. He can out climb me hands down, but I had the upper hand on the flats and the downhills. Side note: Matt, you're a badass, I'm fairly confident that if you had a power meter on your SS, the output would need to be in megawatts on parts of that climb. You sir, are a stud!! 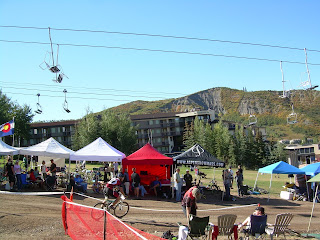 Rollin into the pits 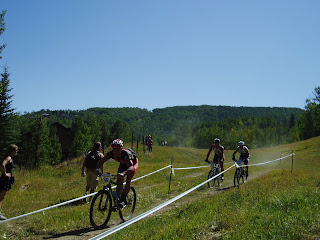 Rolling in another lap
Towards the end of lap 7, I overcooked a bad line in a rough rock garden and pinch flatted my rear tire, so I fixed it and continued on. The next few laps were tough. I always have a few bad laps around the 2/3 point of a race, between keeping things together mentally and physically I always seem to have a "blah" point in races. Also, the underlying fatigue of the past two weeks started to creep up on me. Then at the start of the final downhill on lap 9, I was caught by Lance and got the chance to follow his wheel for most of the downhill in the woods. He was cranking, and it was super cool following him! He even overcooked a turn and almost few off a bridge into the woods! Also, the new Trek he was riding was crazy smooth on the rough bits.
For the few minutes I kept up, it was awesome.

After that, I was out of my mid race funk and the legs were switched back on. Dave kept me fueled and hydrated as I rolled through the pits and I stepped things up and started to hunt people down. I caught a few people and then at the start of the final lap, I heard that Matt was just a few minutes ahead of me. I was actually feeling better than I had for most the race at this point so I dug deep and told myself that I had to catch him on the climb because I would feel guilty passing him on the downhill just because I had suspension. My legs were back and I caught him close to the top. I kept cranking and crossed the line 5th in the solo class. 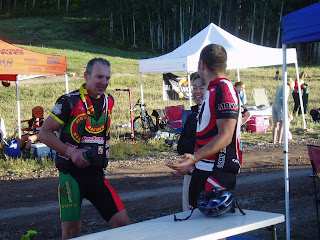 After my "classy" parking lot shower, I headed to the awards, turns out that half the people there were reporters, so after Lance left, so did they. Anyway, Kerkove and Sonya finished 2nd in the mixed duo class and Matt smashed the SS class for the win. 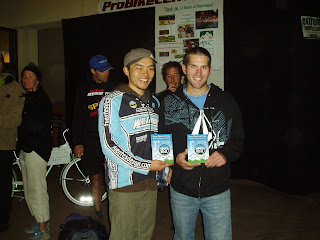 Also, I ended up taking 1st overall for the Rocky Mountain Ultra Endurance Series.
2nd went to the super fast Yuki Saito, who I'll be chasing again in Moab.

Seeing snow in the high country means the ski bug is back, but not before the Moab 24 next month....

I enjoy magic chamois butter and breakfast in bed too! (i.e. the cold, hard passenger seat). hahhaha You, my friend, are a tough ass. Just as tough as they come!! Great job!!!

Your result is fixed! I was ferociously eating pizza at the time, so my typing may have suffered :)

Great job Carney! That is amazing, but not surprising! Your hard work is paying off!

Carney, awesome job out there and really fun having a "friendly" to do much of the race with. Dunno if you talked much to Kelly but it was much the same with her. I think the three of us were pretty much within minutes of each other the entire time. Thanks for the pacing and congrats on that push at the end, you showed a lot. Hope to see you in rasta colors too. ;-)

Also drop on by to and from your way to Moab if you get the chance.

mcturge at yahoo or gmail take your pick.