Yesterday I set out for a 6 hour dirt ride, however about an hour in, my rear freewheel jammed up. This turned my bike into essentially a fixie with gears. So, frustrated, I limped home and called it a day.

Today I wanted to find a long lonely road to climb and just zone out for a few hours. So, I did. I do some of my best thinking while climbing alone, and today was no exception.

On the weekends, the Poudre river is full of rafters and kayakers and other water going folks. One thing that I've always found interesting about the kayaker type is that they all claim to be big environmentalists however they mostly need to drive 2 cars to run a single section of river. Bit interesting I've always thought. Today, I came up with a simple solution. If I ever get into kayaking I'll be sure to rig up a system like this. Besides, this way both your legs and arms will get a workout.

Take one of these. It'll strap nicely to the back of a kayak. Most likely it wont work for a pure whitewater rig, but something a bit larger and it'll easily fit on the back with some bungees. Even if you drove to the take out point and then rode up river to your put in, it'll cut car traffic in half. Not to mention, it'll make it possible to go solo.

As for the Kayak, you'll need something similar to this that can break down: 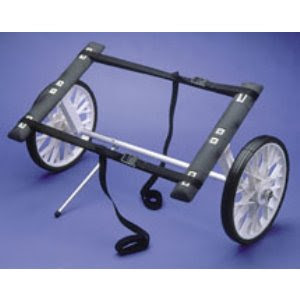 Simply set the Kayak on the trailer, hook the nose of the kayak to the bike with a simple set up similar to a burley system, ride up river, break it down, strap it to the rear of the kayak and paddle away.

It's just an idea, but I don't see why nobody does it on the river.

Next weekend is the Breck 100, and with 13,700 ft of climbing, it'll be a burner of a race. Also, I'll be sure to eat and drink lots more than I did last weekend at the firecracker. Racing at 11,000 feet is a different beast, that's for certain, but I'm learning.

When I used to kayak I would simply lock my kayak at the take out and would run back to the car. Simple and efficient!

Rest up well this week! The Breck 100 might be the toughest thing you do on a bike this entire year.

Paul - I like that idea too. Nobody here does that though. I'd rather ride....running just hurts.

Last year a friend and I signed up for the B63. What we didn't know is that we were going to get a tour of the Ten Mile Range. Let's say we walked about 7 of the first 24 miles pushing our bikes over terrain I had no hope of riding. The down hill was amazing though! We ended up taking about 6 hours for the first loop so I bailed as I didn't have lights for the second loop and had no idea how tough it was going to be. Even the leaders too 3:40 to do the first 24 miles. I hear that they are making it much more ridable this year though (the first loop anyway).

I will be in Vail on Friday the 25th. I would love to do a ride on Saturday or Sunday if you would be up for it. Remember though, I live at 1000 feet elevation and am slower than slow. Let me know.