Origional Growler: Fun in the sun?

Alright, so here's how it went down. The three of us (Mr. Kerkove, my brother, and myself) arrived in Gunnison early Saturday afternoon, checked in, and found camp for the night. 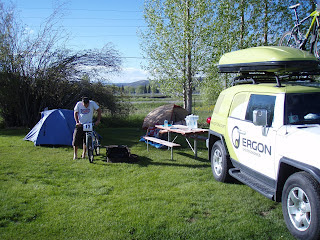 Home sweet home. This time I even brought a tent! But no rain...figures!

So here's my attempted recap of the blur that was the Growler. After some light rain in the hour leading up the the start, things started to clear off and I was feeling good. Then after a long list of course reminders that I was never going to remember, we all took off. There were around 120 people total with roughly 50 in the 32 mile race and the rest in the full 64. The start was super mellow and the first 1.5 miles or so were climbing, so I sat back and eased into things. Once to the singletrack things spread out and I was caught behind some questionable singletrack riders...no biggie, just pass and sit in again. The course was pretty interesting with no big hills, rather, lots of smaller power climbs, lots of smooth singletrack and plenty of rocky bits as well. About half way through my first lap something happened that was the first sign of things to come....my left crank became loose and almost came off on a short climb. WHAT THE??? Initially I thought my cleat had come loose, however when I stopped for the repair, it was the entire crank that was loose. I would end up stopping a total of 4 times to tighten it, but I would have bigger problems with my body.
Overall, I felt pretty good on the first lap. Towards the end, I slowed up a bit to conserve some energy and because I have a tendency to get excited go out too hard too soon. I rolled into the start/finish with a first lap time of 3;15. I only stopped long enough to shove a can of coke into my jersey and I was out again on my final lap, or as I now call it "the lap of death". At the top of the first climb, I took in what would be my last food for the day, a chocolate gell....mmm...liquid brownie! Anyway, after that, I quickly faded, I was still drinking plenty, but just feeling like death warmed over. I had planned on turning things up a bit at this point, but all of a sudden, I had nothing in the legs. As the lap wore on, I would get a big headache and start to have the technical skills of a 10 year old girl whose dad just took off her training wheels before she was ready. I was a human pinball, hitting the absolute worst lines. However, I managed to keep the liquids in and was plenty hydrated ( I took in about 180 oz of fluid during the race: about 130 oz were cytomax). I'll save you all the gritty recount of my journey into a not so happy place in my head, and just say it was the worst I've felt on a bike in a long time. I rolled across the line in a little over 7 hours and 20 minutes. 64 miles total with a little over 8,000 ft in climbing. 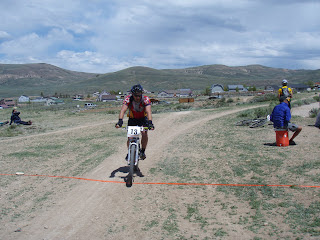 Cooked!! I think I fell over after another 5 feet of coasting. 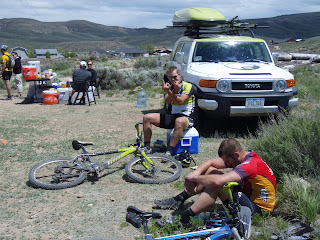 I would like to think that if I would of stayed semi consistent, I could of put in a time of around 6:30-6:40. I would of been quite happy with that. For some perspective, Travis Brown won the event with a time of 6:02, and he had 2 flats. All told, it was a great low-key event and it contained some wicked trails. If it's on again next year, I'll be back for some redemption....afterall who can argue with the $25 entry!!

Next up is some bike camping to get some miles in up high. Then it's off to the Firecracker 50 on the 4th.

He great ride! Remember, you are in CO and not Lames, Iowa! Enjoy it all you can, even when it sucks! %^)

You didn't happen to donate the morning before did you? %^)