Yesterday morning I headed down to Des Moines to ride in this years Cranksgiving. I had heard only good things about the race and wanted to make it down last year when I first heard of it. However this is the first Thanksgiving break (ok so I guess I'm on a long break) but anyway, I'm usually on my way out to Fruita / Moab this time of year, not hanging around Iowa. So I got down to Mars cafe at 11 and got checked in and got my bag of goodies filled with some sweet stuff like stickers (I seem to have a fetish for stickers), t-shirt, some random $1 movie about a gorilla?? and all around a sweet race bag considering the entry fee is all of $0.00!!

I got my list O food items and a small map....sure did help since I was completely lost in that part of town!!! I ran into Moritz and Mario from the ISU Cycling club, however I lost them in the start. After the parking lot Lemond-ish start I tried to follow someone who looked as if they knew how to get around. I was once again riding my DJ bike with a real mans gearing (32X16)...who needs to power a big gear when you can spin at 300 rpm?? Anyway, I followed a handful of people through the Drake campus to some C-store to pick up my first item....good call following those guys....very short line!! I tried to focus on getting small items since...hey they are lighter and my bag isn't that big. A few stops later I was in a big line at a quick mart and heard that Squirrel had a flat....the tables have turned from the 24 my friend...HA. (I still think he beat me by about 20 min). The rest of the race was a blur of standing in line, trying not to get lost and about passing out riding up the hill on MLK to the finish with a full bag (12 pk of soda included, so full I couldn't close it), I also had a big can of coffee stuffed in one sweater pocket, and rice and pasta in the other pocket. However my shampoo burst and splooged all over the inside of my bag!! I have no idea where I finished, but who cares. I heard about 1200 lbs of food was gathered in total. After it was all said and done Moritz, Mario, and myself split some good ole PBR and had a good time watching the trackstand comp and even that random womans Indian leg wrestling comp that seemed to spring out of nowhere. Good times....get out and ride!! 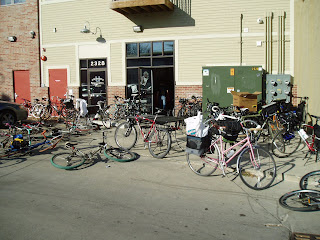 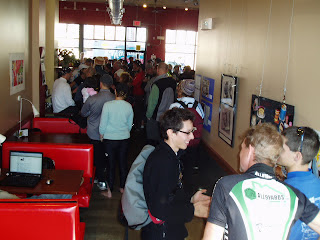