Today is a day off in preparation for heading up to 24 hours of 9 mile this weekend. A year ago this weekend was one of the best of the whole summer....why?? Because Stephen and I only took two days off from riding in our entire 7 week trip, and they were both this weekend in Cincinnati. In the week leading up to our time off we rode the millages of 85, 90, 87, 70, 75, 86, and 100. It doesn't go down much before that either. Needless to say we were pretty beat when we rolled into Town. We stayed at Tam's place for the weekend and the best part was the air conditioning....not something we had very much of all summer, not good considering it was the hottest summer on record! It just so happened that we rolled into Cincinnati around rush hour on a Friday, not good by itself, but the route we had to get to Tams house took us literly through downtown Cincinnati. Not really any fun, so we were pretty ticked when we got to Tam's, but that quickly faded and we had a great weekend.

One thing that Stephen wanted to do on the trip was in no way ever use a car or any form of motorized transport. So when going out to eat or anything we had to confine our choises to places close enough to easily ride to. Needless to say when it was over after 2 months of not being in a car, you feel pretty car sick real fast. 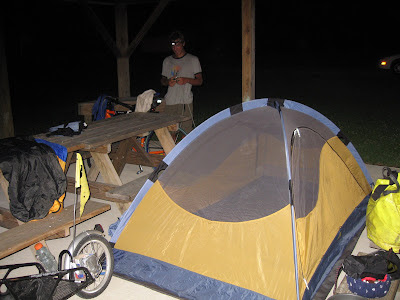 The night before we made it to Cincinnati, Tam came to see us and brought us a huge pan of rice crispie treats...which we ate in about 13 seconds 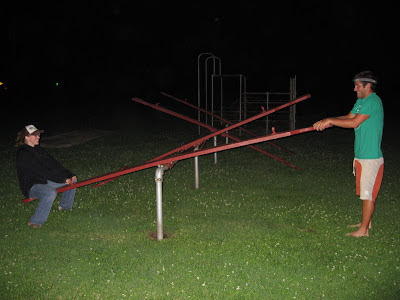 No matter how tired you are from riding, you can always find time for a bit of horseplay!!

Good times that weekend....much needed R&R. Our spirits were renewed after those two days and we only had another 700 or so miles left....that's nothing by that point...just over a week.

On the job front, I had a phone interview today and it went really well. I have one possibly two more next week.....looks like I'm going to be doing some more driving!!

Now....Off to the land of cows and cheese curds!