After driving up to Blue Mounds on Friday afternoon I got a campsite and met up with my parents who also made the drive. I saw that there was a friendly coon running around the campsite that even bothered me a few times as I was trying to fall asleep, I was sleeping on the ground so I just tried to chase it away each time it would come within a few feet. The next morning we saw that it had crawled in the half open drivers window on my parents car and made a late night snack of some chips in the passenger seat. There were a fresh set of greasy paw prints all over the outside of the window it left as it crawled out. Glad to feed the wildlife?!?

Race morning I drove up the road to the venue and got set up. I recognized a few faces from the 12 hour race at La Crosse 2 weeks ago. I rode a bit of the course on my warm up and quickly realized just how rocky it would be. The gun went off at 8:00 sharp and everyone was off. I was 7th or so into the first downhill and worked on settling in. I've been sick over the last week so I was feeling a bit tired from the start and a bit unmotivated because of it. Anyway, here is my attempt at a lap by lap recount of the race. 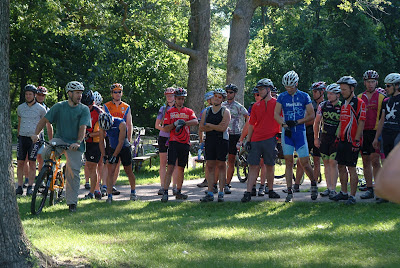 1st lap (1:02)
I tried to settle in and not go too hard while I get to know the trail. Things were feeling good and my new pedals were working great, no more play like my old ones which sure helps in some technical sections and when you need that extra little bit of kick.

Lap 2 (1:03)
Again, just tried to stay steady, and keep up on hydration and food because it was already getting hot and it was only 10 in the morning....I think it would top out at around 100 for the day! 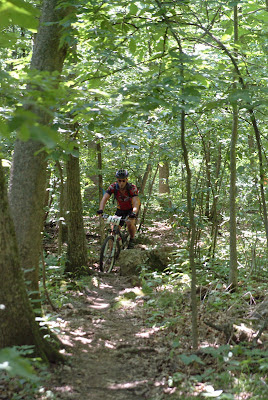 lap 4 (1:09)
The rocks were starting to take a toll on me at this point. There were rocks in the trail, on the side of the trail....everywhere. In some sections where it was a bit overgrown you couldn't see all of the rocks so one would sneak up on you and before you knew it your stomach was on the bars. Also, as I got tired, I started to make some mistakes here and there, some sections required some luck to completely clean and they got harder and harder with every lap.

lap 5 (1:09)
I got an update from my dad that there was 3 of us fighting for 3rd place and the 2nd place guy was about 10 ahead of me. However, by this point, it was pretty hot and I was trying to drink as much as possible, but my stomach was getting water logged and the heat was starting to take a bit of a toll. Everything was drenched in sweat, my socks, my eyes...everything.

Lap 8 (1:16)
I was starting to feel quite a bit better and was starting to turn it up for the last few laps to put some more time on 4th place when about half the way into the lap I hit a rock quite hard with my left petal. I'd been hitting rocks quite often, but this was a real solid hit. Sure enough, my pedal was busted and I couldn't clip in. I spent the rest of the lap trying to hold on while my left food hopped all over the pedal. Not too much fun, especially on the rough parts. 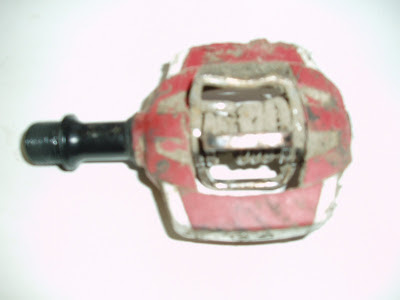 The broken pedal....Took it out of the box only 4 days ago!!
Lap 9 (1:04)
I quickly changed my pedal in the pit with the one off of my spare bike. I would of just taken the spare bike, but I didn't even want to think about riding that course on a hardtail. The 4th place guy had passed me at the end of the lap and now had a 2-3 minute lead on me. I grabbed some gel and water and quickly went out trying to catch him. I was feeling great and was able to ride real fast. Don't know what it was, just needed some motivation I guess. I ended up catching him on one of the singletrack climbs while he was walking. I rode past as I cranked up the climb. He asked what place I was in and I told him that he and I were fighting for 3rd. I kept the pace as high as I could and he didn't challenge me. I was really starting to feel beat, but kept cranking hard. Turns out it was one of my fastest laps.

Lap 10 (1:05)
I came into the pit with just enough time for one more lap. I took a minute or two breather to see if Chris (4th place) was going out for another lap. He was so I took off again. I passed him on the first downhill when he took a small crash and never saw him again. The whole last lap I gave it everything I had and rode like a mad man. I wanted to ride safe though and not have any mechanical problem, because that would be a disaster. I was pretty cooked at the finish, but real happy that I was able to push it that hard at the end of the race. I've never been in that close of a race before that wasn't an XC race.

Turns out that Chris finished about 2 minutes behind me overall. 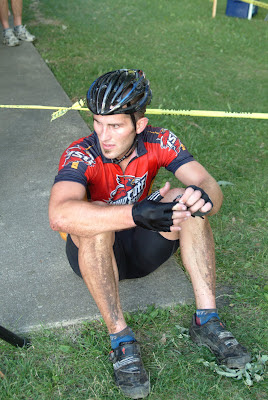 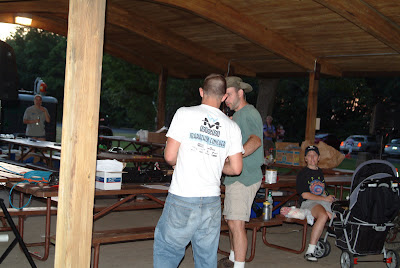 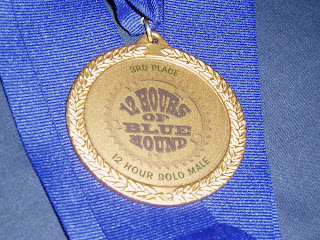 Oh yeah, my dad bought a few raffle tickets and it turns out that he made good on his investment!! Not too shabby!! 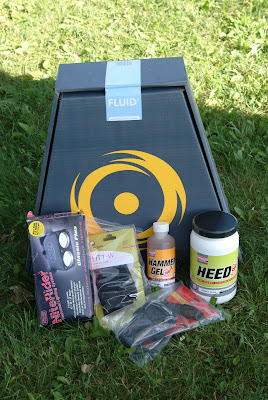 6 hrs is tough. 12 hrs is insane! By far one of the toughest enduro races around.