A year ago today, I boarded an Amtrak with my brother for a 2 month bike trip. Our plan was to tour cross country. We really didn't have a particular route in mind or even planned. We bought train tickets to , so we would start from there, head to the coast, then down the coast for awhile, then turn east and ride until we hit another ocean. We had a few spots we wanted to hit, like some National Parks, but other than that we didn't know where we were going or even where we would sleep every night when we left in the morning. As we were leaving my brother was also leaving home because he would be leaving for collage as soon as we returned, which made leaving even harder. We planned on an 8 week trip with several days for traveling before and after, leaving about 7 weeks for riding. The experiences of the trip are far too numerous to describe here even if I was to re-live each day. It's hard to put into words, but touring on your own, and not having anyone following you in places where you have never been and not even knowing what lies ahead is difficult to describe and you can't really understand it unless you've lived it. The experiences we had were amazing and some of the things we pushed ourselves through were hard as hell. At times the feeling of despair and frustration were insane - ever ridden in 110 degree heat, or ridden over 80 miles a day for weeks on end without ever going into air conditioning through the desert, while fixing flat after flat, or having a bad bike problem, only to be a few days away from any shop? I could go on and on, but unless you've actually been through it in person, it's just not the same. Ah well, the point of this post was to try and remember what the start of the trip was like because after the trip we were both changed in alot of ways. Over the next 2 months on occasion, I'm sure I'll post something that happened a year ago, as I am trying to read my journal entry from a year ago every day to remind myself of some of the good times my bro and I had.

Here are a few pictures to get started: 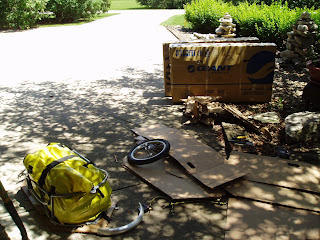 Ever try packing everything you may need for 2 months into a bag while at the same time trying to take nothing you don't NEED!!...It's pretty friggin hard! 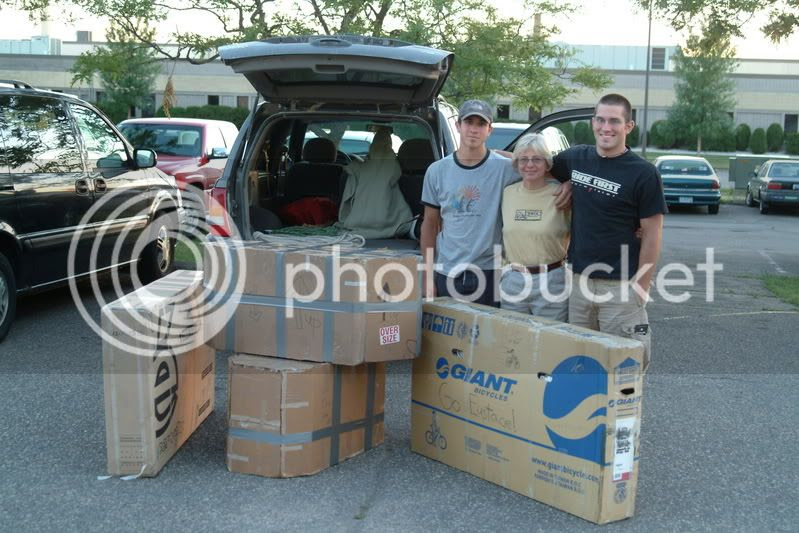 Saying goodbye at the Amtrak Station 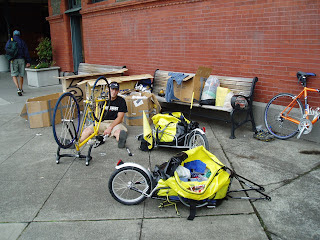 Building our bikes and trailers at the Portland Amtrak station Our first nights camp....everything is still clean and shiny....being that we are dirtbags, we only paid for a campsite one night the whole trip....that was in Yellowstone and it was only $5. Other than that we crashed in city parks, baseball fields, yards, churches, behind hotels using branches to hide our stuff, even the side of the road at times. Cops woke us up a few times, but when we explained what we were doing they were all cool with it and let us stay wherever we were. The best part was crashing by hotels and in the morning hitting up their continental breakfast!!!....gotta love being a dirtbag!

I'll try to put some pictures up to remind myself of the highs and lows over the next while. Needless to say, I stared down almost 4,000 miles of road over the next 7 weeks, so there are alot of memories that are still as vivid as yesterday in my mind, I'll try to share a few now and again.

Right now, I'm off to La Crosse to do a little suffering in the Bufflands Epic Enduro Race.....let the fun begin!

Cool stuff. You've got some great stories to tell. You should tell then while there are still fresh.

Oh, to be young again. No wonder you are so damn stong, having survived a journey like that.