I headed up to Peterson Pits this morning for the Vieshea XC race. The weather was looking great for a day of racing. I met up with Jubil and we rode a lap to warm up. Each lap was only a little over 2 miles in length and real flat, making for a super fast race. I was racing expert which ment I had to ride 7 laps, let the suffering begin.

The gun went off at noon and I hit the singletrack in 8th place. I moved up a spot or two in the first few minutes and then worked on settling in. The lead group was staying together real nicely. We all rode in a tight line for the first 2 laps at a real fast pace. During the 3rd lap, the first two guys rode to a 30 second lead or so and I was stuck on second wheel in the chase group. I rode with this guy from for the next 3 laps as we went back forth. The last 0.3 miles or so are on a flat gravel road...perfect for a sprint finish. Anyway, at the end of the 5th lap the guy from popped out from behind me and sprinted at the start of the gravel. I hung onto his wheel thinking he was trying to break me. I just sucked his wheel, and then at the line he put his hand in the air and pulled off to the side....WTF?? The guy was only racing Sport!?!? I thought he was racing expert and was pacing him. Now I had 2 more laps and I was about 2 minutes down on the first place guy. So, I set out on a two lap time trial to try and catch the leaders. I kept closing in, and on the last lap I laid it all on the line. I caught the second place guy at the start of the finishing gravel section and put the hammer all the way down. I glanced back and he couldn't hold my wheel. I finished in 2nd place. I think I was about 40 seconds off of first, but I'm not 100% certain. 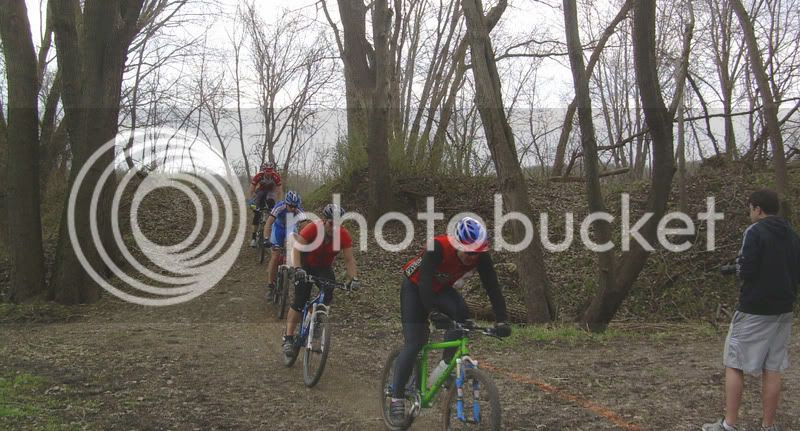 Cranking along about 2 min into the race. The sport guy who I
would eventually follow is sitting on my wheel.

If I would have known that I was following the lead sport guy I would have made a bigger effort earlier on to catch the lead guys, but he was cranking along at a good pace. Rumor had it that the first and second place sport guys came down from expert to race sport for the day. I don't know if it's true, but the both were flying and had a huge lead on the 3rd place sport rider...Jubil. I was happy with my effort, even though I messed up a bit on my strategy. I finished in a little over an hour with a max heart rate of 201 at the finish, and an average of 187 for the whole effort. I'm trashed to say the least. Good race though...Peace

The chase group is working togeter real well here and keeping a great pace. Too bad we wern't all in the same class because it would of been a real close race.